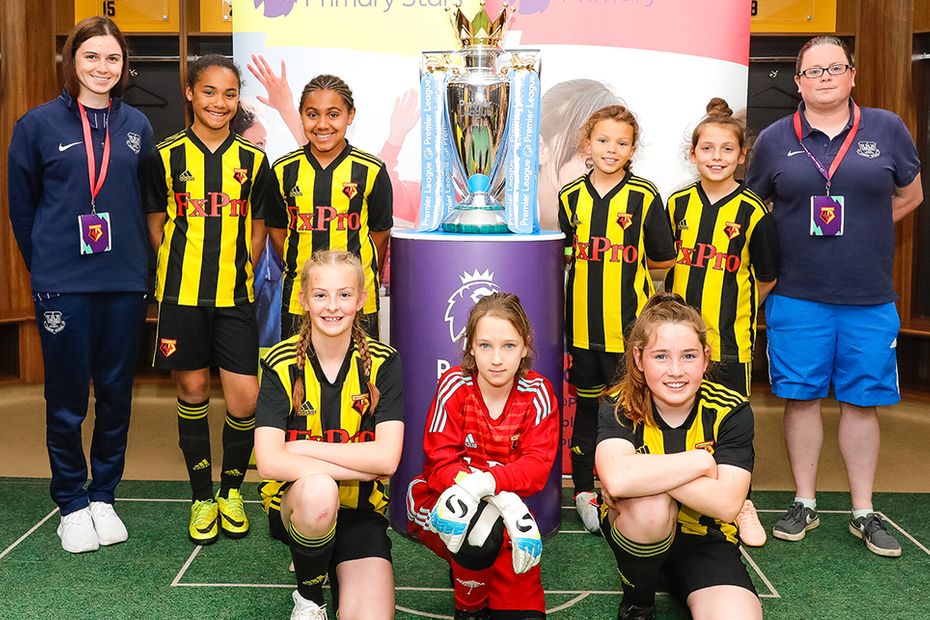 The Premier League Primary Stars Football Tournament was especially satisfying for one primary school teacher, who formed a team for girls only two years ago.

Lady Bankes Junior School, in Hillingdon, London, was without a girls' team when Kerry Cronin became a teacher there in 2017.

"The assistant head and I decided to start one," said the head of PE. "We had a girl who loved football and played for Watford Academy and we used that to our advantage.

"We put the interest out there and now we have got two clubs taking place every week. The waiting list for training is enormous, the girls love it."

They reached the final of Watford's qualification competition for the 2018 PL Primary Stars Football Tournament before going one better this year to represent the Hornets at Molineux Stadium on Tuesday.

"To have this opportunity to come here and play at a Premier League stadium is absolutely fantastic," says Cronin, pictured above left with the team. "It's an achievement for these girls.

"Some of them didn't know each other before we formed this team, so they've made new friends and they will share this experience for the rest of their lives."

🤩 Kerry Cronin, Head of PE at @lady_bankes explains how important it is to inspire the next generation! @WFCTrust #PLPrimaryStars pic.twitter.com/QpM6Lwe780

Lady Bankes is one of more than 16,000 schools involved in Premier League Primary Stars, having introduced the programme at the start of this year.

Cronin says PL Primary Stars, delivered by Watford CSE Trust, is having a far-reaching effect for all girls at the school as well as for her ability to promote football to them.

"It's grown the confidence of all the children, not just in sport," she says. "I have children who do not regard PE as their favourite subject but [the programme] caters for the needs of everyone.

"Being a teacher, differentiation is such a key thing. So the way they adapt, based on the needs of the child, is brilliant.

"The confidence spills into all lessons. You can bring that love of things they've learnt, such as resilience, into other lessons. It goes into every aspect of school."

"Primary Stars has grown the confidence of all the children, not just in sport"

And Cronin says Lady Bankes reaching the tournament final this week should encourage more girls to take up the game.

"It will hopefully grow their love for football even further," she says. "Some who weren't playing before have joined teams since we won the Watford competition.

"So it's building girls into football and, with the Women's World Cup this summer, we are hoping to inspire the future generation."