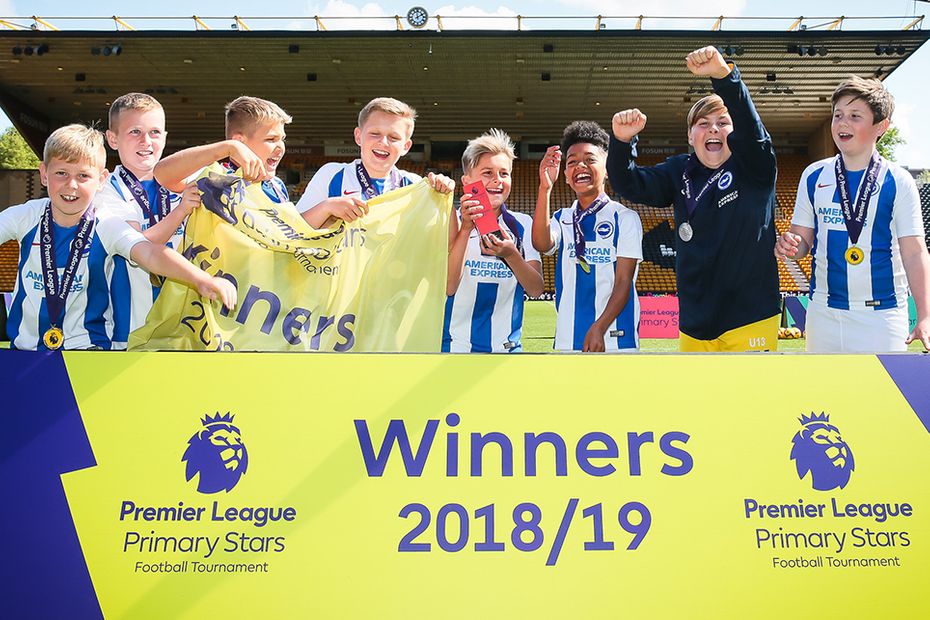 The attitude and character shown by Premier League Primary Stars Football Tournament winners Orchards Junior School will stand the pupils in good stead for the rest of their lives.

That is according to their teacher, Jamie Parkinson, who was impressed with how the team displayed the PL Primary Stars core values as they claimed victory for Brighton & Hove Albion in the Under-11 Mixed competition at Molineux Stadium.

"They were absolutely brilliant," said Parkinson, eLearning Leader and Year 6 football coach. "I am just so proud of them with the way they conducted themselves.

"They won today because of their attitude. We said to them from the start, 'Be nice to each other. If you make a mistake, pick each other up. Always keep positive, no negativity.'

"You look at the world we are living in now and then you look at the attitude of these boys and they are taking away positive influence from this. They will be like that now for the rest of their lives."

The @premierleague values being shown throughout the #PLPrimaryStars finals! pic.twitter.com/WrSCy7Br8S

Orchards Junior from Worthing were unbeaten in their group and came through a must-win match against Churchfields Junior, representing West Ham United, in the final round-robin fixture to make the semi-final.

There they held their nerve to defeat Manchester United's Bollin Primary, who had the son of former Liverpool striker Emile Heskey in their ranks, on sudden-death penalties.

And in the final they defeated Newcastle United's St Margaret's Primary School 1-0, with the winning goal being scored by 11-year-old defender Harry, a volley with the outside of his foot.

"It's extraordinary. Going through all of the competitions and representing the team I support is just so hard to describe," he said. "Scoring the winning goal made the feeling 10 times better.

"We are good friends and we didn't argue. We stuck together no matter what we did. That is a lesson I will take going into secondary school."

"It will probably get us in front of the whole school!" 👊