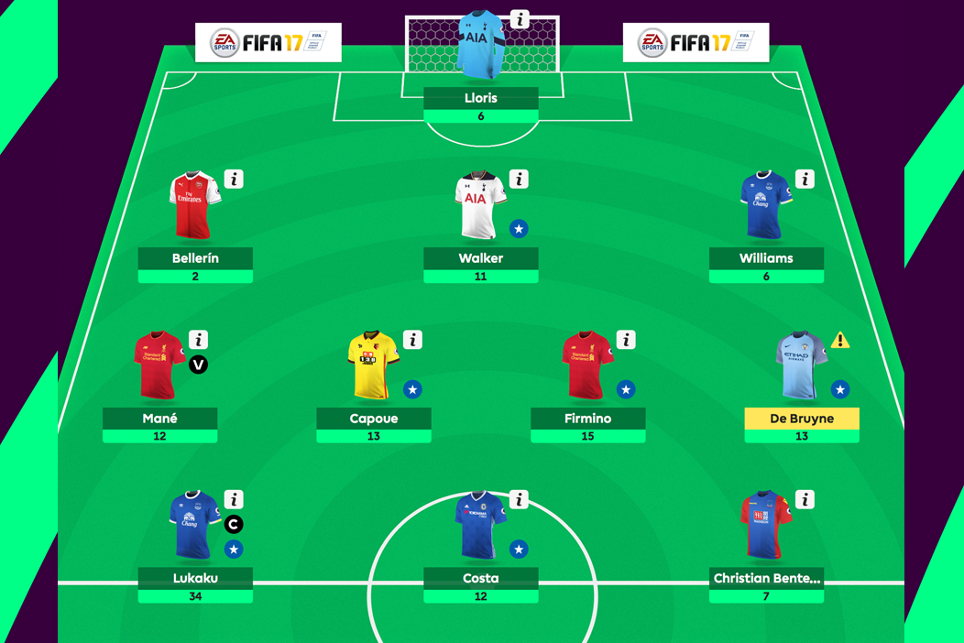 Romelu Lukaku’s (£9.1million) 11-minute hat-trick turned mini-leagues upside down and eventually decided the prize for manager of the week.

Patrick Kennedy was one of the 2% who went into Monday’s match with the armband on the Everton striker.

With Ashley Williams (£5.0m) also part of his three-man defence, he was reliant on the Toffees earning a result – and they duly obliged.

The 40 points gathered via Everton’s 3-0 win proved decisive as Patrick’s XI stormed to a 131-point tally.

That achievement was all the more remarkable given that, back in Gameweek 3, his line-up had slumped to 22 points.

Despite that difficult weekend, Patrick resisted deploying the Wildcard and turned instead to two transfers to reverse his fortunes.

The decision to bring in Lukaku on Saturday morning was the start of the transformation.

Patrick swooped for the Belgian at 8.58am BST in a swap with Manchester City’s Sergio Aguero (£13.0m).

That move was vindicated as both Lukaku and Costa combined for 46 points.

But it was Patrick’s midfield that laid the foundations for success.

The Brazilian had tallied only 12 points ahead of Saturday’s deadline, but Patrick avoided the lure of Liverpool team-mate Philippe Coutinho (£8.2m) and kept faith.

That was repaid with Firmino’s 15-point haul in Liverpool’s convincing win over Leicester City at Anfield.

He also avoided being one of the 269,366 Etienne Capoue (£4.8m) owners who benched the Frenchman for Watford’s victory at West Ham United.

The Manchester City man arrived as one of four transfers and an eight-point spend in Gameweek 3.

That looked folly when Patrick’s trades fell flat, leading to a 22-point total that saw him rank 3,269,405th for the Gameweek.

Riding out that disappointment, De Bruyne was to play a key role after the international break.

Patrick turned his season on its head by showing patience and making key Saturday morning transfers, earning him a richly deserved manager of the week title.