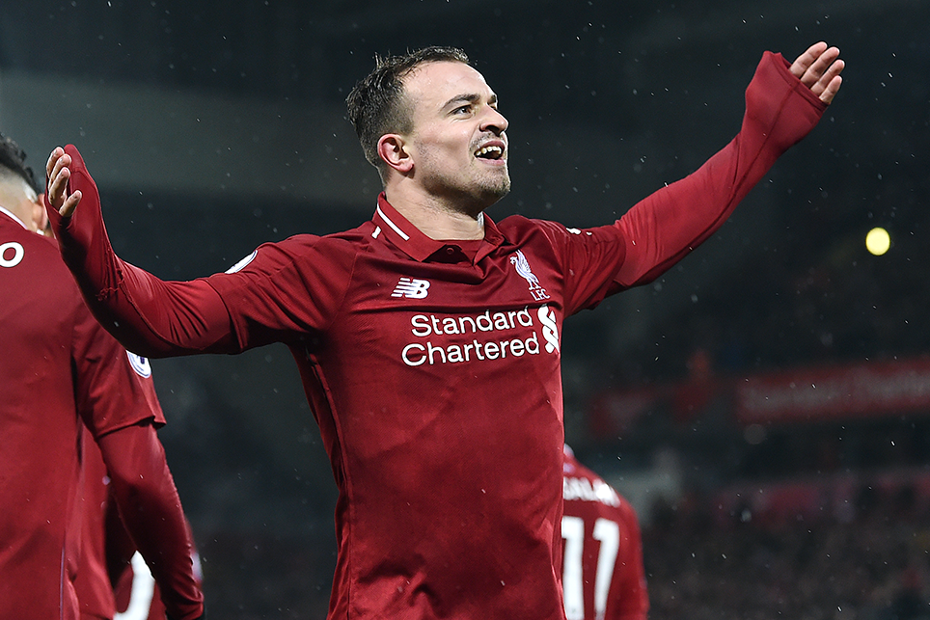 Midfielder's double leads the way as The Scout reviews the Gameweek's top performers in FPL.

Shaqiri: I always try to make an impact! External Link
GW17 Lessons: Jimenez a gift for FPL managers
Which players are close to one-match bans?

Xherdan Shaqiri (£7.1m) needed only 14 minutes off the bench to seal his place in the Dream Team for Gameweek 17 in Fantasy Premier League.

The Liverpool playmaker's two goals in a 3-1 win over Manchester United earned him a season-high haul of 14 points.

Fellow midfielder Henrikh Mkhitaryan (£6.7m) equalled that total with a brace in Arsenal's 3-2 loss at Southampton.

West Ham United made it four wins on the bounce with a 2-0 victory at Fulham. Fabianski has kept two clean sheets in that run, earning him a Dream Team place on both occasions.

Newcastle United's 1-0 win at Huddersfield Town featured a fine all-round performance from their Spanish full-back. He earned points from a clean sheet, assist and the maximum bonus award.

An ever-present in the Wolverhampton Wanderers backline this season, Coady recorded his first clean sheet points since Gameweek 8 in a 2-0 victory over AFC Bournemouth.

Owned by only 3.8 per cent of FPL managers, the Belgian has started all but two of Tottenham Hotspur's league matches this season. A 1-0 win against Burnley made it back-to-back clean sheets.

The midfielder has been in and out of the starting XI since Unai Emery took charge at Arsenal but he's still found time for two double-digit returns.

After five straight league starts, Shaqiri had to make do with a place on the bench against Man Utd. His double means he has scored four goals in the last six Gameweeks.

The winger was the star of Watford's 3-2 defeat of Cardiff City, scoring one goal, setting up another and earning three bonus points.

A goal, assist and maximum bonus in a 2-1 win at Brighton & Hove Albion took the Chelsea attacker to the top of FPL's scoring charts. Hazard's consistency has been remarkable this season. He has produced returns in 12 of the 16 matches in which he's been involved.

A goal against Fulham made it four straight returns for the Scot. He's also made the Dream Team in two of the last three Gameweeks and is currently a top-three transfer target.

The Southampton forward roared back from a four-match injury layoff with a brace against Arsenal. He's scored points in the last three Gameweeks in which he's featured.

The Brazilian was back to his best in Manchester City's 3-1 win over Everton, scoring twice and earning maximum bonus points.