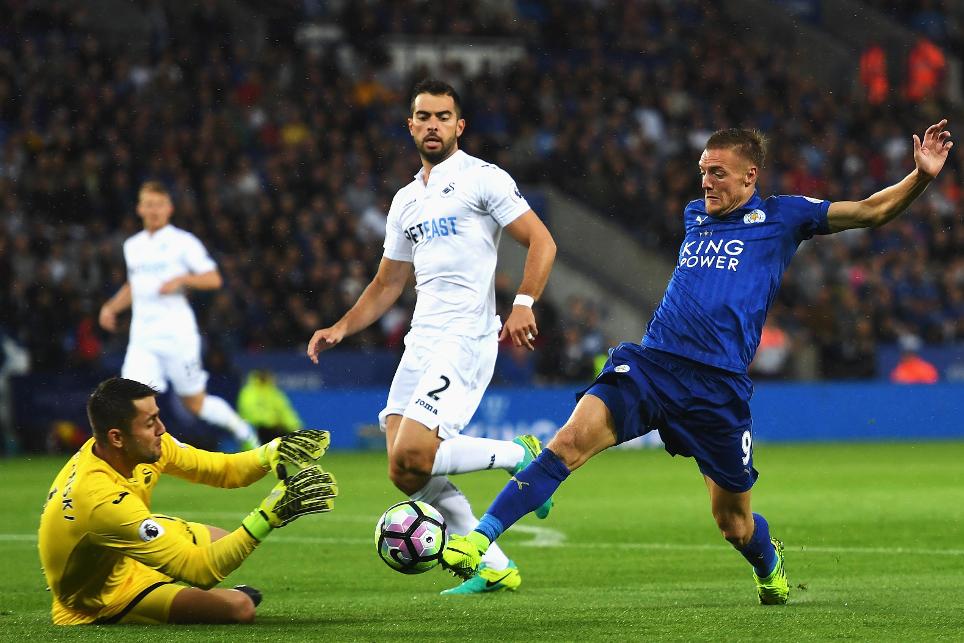 The Pole registered four saves against the champions, denying Riyad Mahrez (£9.5m) with a second-half penalty stop, to produce a score of 31 in the Bonus Points System.

Vardy bagged the opening goal, while Drinkwater turned in an all-round display in the centre of the park.

The midfielder provided the assist for Vardy’s strike, supplementing this with 54 completed passes, 11 recoveries and six clearances, blocks and interceptions (CBI).

The goalscorers took up the top three places in the ICT Index at the King Power.

Morgan scored what proved to be the winner and also produced 10 clearances, blocks and interceptions (CBI).

Fer bagged the visitors’ consolation. He has scored twice in the opening three Gameweeks, having served up the winner in the season opener at Burnley.

The midfielder fired two of his three attempts from inside the Leicester penalty area and created a scoring chance for Francesco Guidolin’s team.

Vardy registered three attempts against Swansea, scoring for the first time this season.

Mahrez’s penalty miss has persuaded more than 58,000 FPL managers to part company with the Algerian this week.

He has failed with three of his last four spot-kicks and Claudio Ranieri may look to move Vardy back to first-choice.

Considering that Leicester have been awarded two penalties in three Gameweeks, this could have a significant impact on how we assess the Foxes’ main attackers.

Vardy has been sold by more FPL managers (312,000) than any forward so far, although a return to penalty duties would undoubtedly boost his potential.

Morgan’s goal highlights his imposing threat from the back. The Leicester captain produced 21 efforts inside the box in 2015/16; only four defenders managed more.

Kasper Schmeichel (£5.0m) was forced off with a hernia problem and replaced by Ron-Robert Zieler (£4.5m). The Dane is set to have surgery over the international break, with Ranieri confident he will be ready to face Liverpool in Gameweek 4.

For Swansea, Stephen Kingsley (£4.1m) started for the third successive Gameweek but regular left-back Neil Taylor (£4.4m) earned a run-out in the EFL Cup last week and is expected to return to full fitness over the international break.

Kingsley has been subject to over 238,000 transfers in so far, the second highest of any defender.

Fer’s quick start to the season has also earned him a price rise.

But, Swansea are poised for a testing run of fixtures that may deter many managers as they prepare to take on Chelsea, Southampton, Manchester City, Liverpool and Arsenal in the next five Gameweeks.