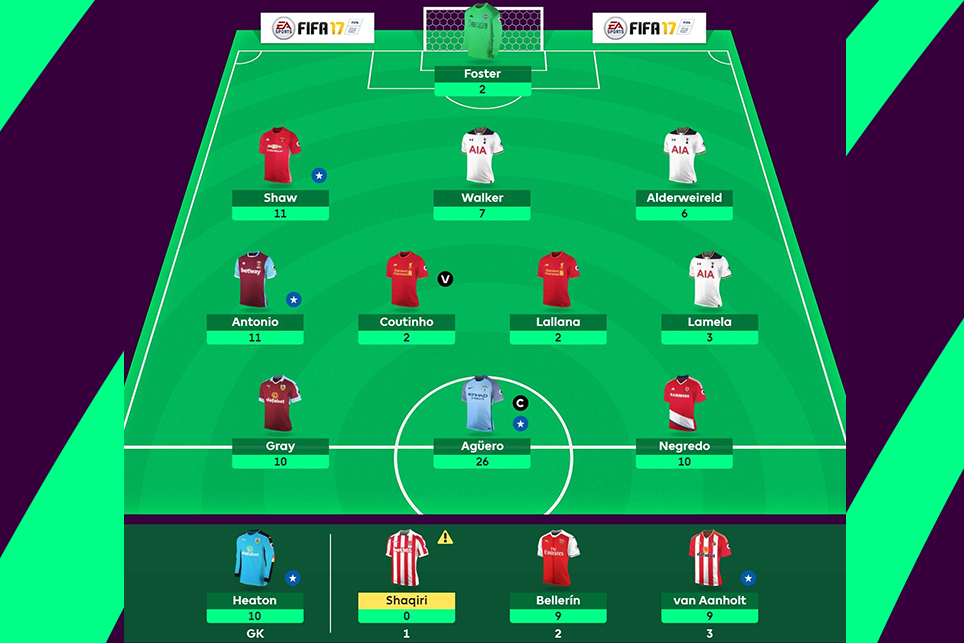 No Zlatan, no problem as Bench Boost helps Harvey Busby to top of overall rankings in Fantasy

FPL Gameweek 1 Manager of the Week

Harvey Busby’s 'TheRealHarvz' stormed to the Fantasy Premier League Manager of the Week Gameweek 2 prize with an untouchable 118-point tally.

That total was also enough to establish him as the new overall leader in Fantasy.

Having scored 79 points over the opening weekend, Harvey’s squad now sits 12 points ahead of his nearest rival at the summit of the FPL rankings.

The achievement is all the more impressive given that he has opted to ignore this season’s most popular FPL target, as there is currently no place for Manchester United’s Zlatan Ibrahimovic (£11.6million) in his squad.

Harvey’s Gameweek 2 total was gathered without the Swedish striker’s two goals and 13-point haul in Friday evening's victory over Southampton.

Instead, he has relied on Manchester City’s Sergio Aguero (£13.1m) as his captain over both Gameweeks, supplementing his goals with able support from Burnley’s Andre Gray (£6.5m) and Middlesbrough’s Alvaro Negredo (£6.7m).

Harvey has also shown commendable insight with his midfield selections.

Last weekend he had the trio of Liverpool's Philippe Coutinho (£8.2m), Adam Lallana (£7.1m) and Tottenham Hotpsur's Erik Lamela (£7.1m) in place, totalling 35 points between them.

In Gameweek 2, it was Michail Antonio’s (£7.0m) turn to come to the fore with 11 points earned in West Ham United's win over AFC Bournemouth.

But it was Harvey’s defence that steered him to Gameweek 2 glory.

Without the hefty outlay on Ibrahimovic, he has been able to recruit both of the top-priced defenders in Arsenal’s Hector Bellerin and Tottenham Hotspur’s Toby Alderweireld (both £6.5m).

That formidable five-man defence came into its own in Gameweek 2 as Harvey played his Bench Boost chip, earning 18 additional points from defenders, plus 10 points from Burnley’s Tom Heaton (£4.5m).

Despite Stoke City’s Xherdan Shaqiri (£6.5m) missing out against Manchester City, Harvey’s Bench Boost was the most effective chip played in Gameweek 2, propelling his squad to the weekly prize and the top spot overall.

Harvey edged out both John Williamson and Alex Yerrell, who both deployed the Triple Captain chip on Aguero to earn 115-point Gameweek totals.

At the other end of the spectrum, Alex Leeman’s 'Goldilocks' squad suffered a punishing weekend.

His decision to bench Manchester City pair Aguero and Nolito (£8.9m), along with Hull City’s Eldin Jakupovic (£4.0m) and Curtis Davies (£5.0m), saw him miss out on 45 points from his bench – the biggest total left in reserve in Gameweek 2.