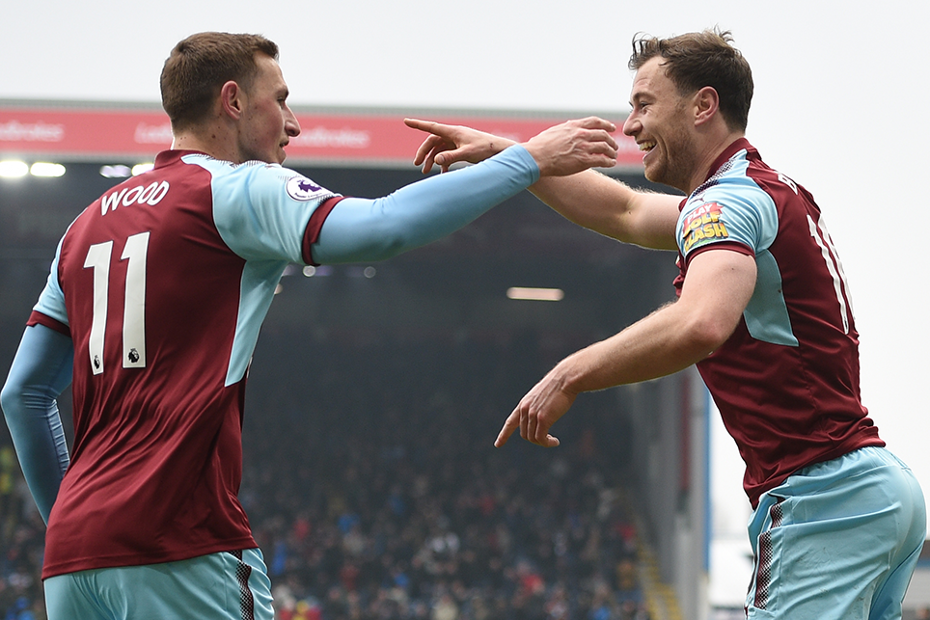 Finding a way to score more goals without sacrificing defensive stability has been high on Burnley manager Sean Dyche’s agenda in recent weeks.

In spite of their success this term the Clarets only scored more than one goal in four of their first 29 Premier League matches.

Understanding the pressure that such a low goal return places on the need to keep clean sheets, Dyche has veered away from his 4-4-1-1 formation.

Instead he has deployed Ashley Barnes and Chris Wood as a strike pairing, and the switch has brought instant results.

Before Thursday’s 2-1 defeat by Chelsea, Burnley had scored more than one goal in five successive contests, winning all of them.

Noted for their physicality, Barnes and Wood, who are both over 6ft tall, make for an unusual pairing.

But Burnley’s direct approach has suited the deployment of a powerhouse front two.

Across the last six matches, in which the pair have started four times, Burnley have been significantly more potent.

Dyche’s side have scored once every 32.25 minutes with Wood and Barnes on the pitch. In that time the two strikers have contributed seven goals.

Interestingly, prior to 31 March Dyche had not selected Wood and Barnes in the same starting XI.

From August to February they had been twinned sparingly, late on in 12 matches for a combined playing time of 190 minutes.

Why does it work?

Both are equally capable of holding the ball up by coming short or running in behind, and this has created confusion.

Wood opened up space for Barnes to burst through and score against Everton. The New Zealander's run into the right channel then preceded a cutback for Barnes's strike at West Ham. And, against Leicester City, Barnes released Wood in behind for his goal.

They rarely stand in a straight line, and those angles have caused their markers problems.

When delivering crosses, the penalty area has also been filled with twice as much attacking menace. Both players have scored from wide deliveries.

Having extra physical presence inside the area from crosses has been an important weapon.

Defenders and midfielders have had a choice of strikers to aim for with passes from back to front. This has been a good outlet that also makes things less predictable for opposition defenders.

Clean sheets have been harder to come by with two strikers in the side. Of the four starts, none have produced a shutout.

But Dyche will also know his side have not suffered too much defensively.

The two forwards work hard to shield passes into central midfield, closing down as a pair – and Barnes naturally drops in to the No 10 role previously occupied by Jeff Hendrick.

Indeed, Barnes wins the ball back for the Clarets inside the middle third almost as often as Hendrick.

The striker has regained possession in that area once every 45 minutes, compared to once every 40 minutes by the Irishman.

One fascinating tactical ploy from Burnley’s manager this term has been his willingness to make bold substitutions when he smells blood.

Dyche brought on Wood to great effect to win recent matches against Everton and West Ham, and his late introduction of Sam Vokes at Watford - to create a trio of big strikers - also swung that match in their favour.

The Hornets simply could not handle the extra aerial power of Burnley, who scored from two late set-pieces.

Finishing matches with force, Burnley have scored 18 of their 34 goals in the final half-hour of matches.

Sunday’s opponents Stoke City, who have conceded goals in the 86th minute or later four times in the last four matches, would do well to heed the warning.