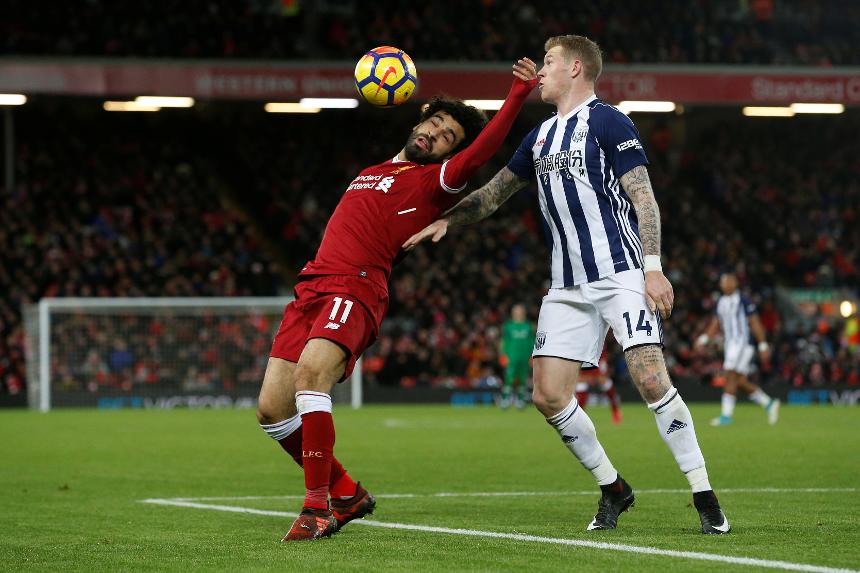 Stopping a Liverpool attack led by the Premier League’s top scorer Mohamed Salah has been a task beyond most teams this season.

But, their opponents on Saturday, West Bromwich Albion, are one of only two teams to have done so in the past 24 Premier League matches and the last side to have done so at Anfield.

Two West Brom players will play key roles in ensuring Salah does not run amok at The Hawthorns.

The visit of Jurgen Klopp’s team to The Hawthorns comes on the back of West Brom’s outstanding 1-0 win at Manchester United last Sunday.

Expect a similar approach from interim coach Darren Moore on Saturday to the one he adopted at Old Trafford.

Moore is likely to deploy a compact and industrious 4-4-1-1 formation and demand another resilient, counter-attacking display.

McClean has featured in three of Albion’s four PL victories this season and boasts a win ratio of 30 per cent from the 10 matches he has started in 2017/18.

His job against Liverpool will be to protect Kieran Gibbs as a supplementary left-back, while also offering an outlet when West Brom break.

Moore encourages his back four to stay narrow and defend the width of the penalty area, so McClean will spend long spells in the left-back spot in a role he performs with ease.

Last Sunday at United he was outstanding in that corner of the pitch.

Across 90 minutes he regained possession for his team eight times, a joint-high with Chris Brunt.

The 28-year-old is Albion’s second-best tackler. Making 2.89 tackles per 90, winning 1.96 per match, his ball-winning ability is surpassed only by Claudio Yacob.

As the table below shows, McClean also has the fitness levels to handle this demanding dual role.

Top distances and most sprints

Powering up and down the flank, he can slot into an effective back six when Liverpool approach the final third, as well as transform into a winger when the Baggies venture forward.

One of the competition's most athletic players, he will aim to use his strength to disrupt Salah’s flow on the ball, and close down the space in which he operates.