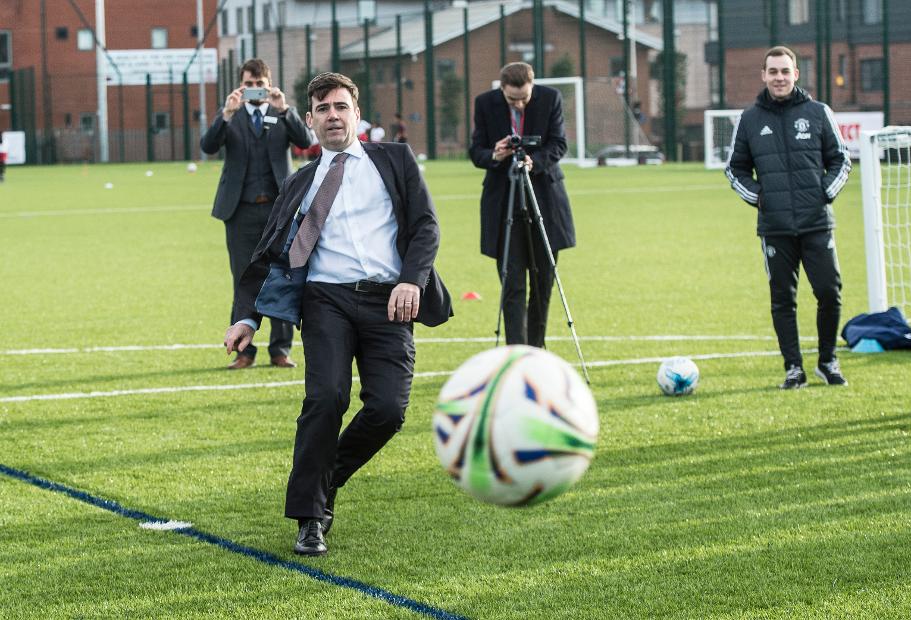 For Andy Burnham, the opportunity for football to contribute to local communities has always been close to his heart.

That was why he was involved in the formation of the Football Foundation in 2000 to help create the facilities for people from all walks of life to play the game.

Eighteen years later, as the Mayor of Greater Manchester, Burnham is seeing his passion for football to transform lives put into place at Dean Trust Ardwick secondary school.

"Particularly in a city community, people suffer sometimes from a lack of good recreational space," he says.

Ardwick, in Manchester, is one such city community. But thanks to a new sports pavilion that Burnham opened with Manchester United great Denis Irwin, the 1,200 school students, but also local clubs and community outreach programmes will have a place they can use, all-day and all-year round.

"When I had a small role in helping create the Football Foundation, this is exactly what we had in mind - the game giving back to the communities that most need that support," Burnham says.

"This isn't just a new facility, it's the best of its kind. For a community like this that sends a really powerful message.

"Just looking at the timetable for its use, it's packed out. It's used heavily by the school but also a number of partner clubs - amateur, semi-professional and junior clubs. That's the kind of community spirit we want to build."

The school lies close to Manchester City's Etihad Stadium while Manchester United Foundation coaches are based at the site full time. And Burnham says this connection with the professional game in the city is a powerful message for the people living in Ardwick.

"It says something to them - that the Premier League is not just putting on a great show in the big stadium up the road, it's putting on a good show in this community," he says.

"People say, 'The game has lost its roots', but this is proof that it hasn't forgotten where it came from."

The development was funded with a grant from the Premier League and The FA Facilities Fund, delivered by the Football Foundation. It will benefit the 1,200 students but also local clubs, and the school will be a hub for community outreach programmes.

"The game grew out of communities like this. It has gone on to achieve great global success but is still connected to those grass roots, and nurturing them.

"It's coming up to 18 years now since the Foundation was created, and it's done an enormous amount of good in that time.

"The fact it's still making these kinds of investments fills me with pride."

The pavilion will also boost the burgeoning female football participation at the school.

"As Mayor of Greater Manchester I want to see that more and more - championing the women's and girls' game, because I think there’s more we can do there to reach them,” Burnham says.