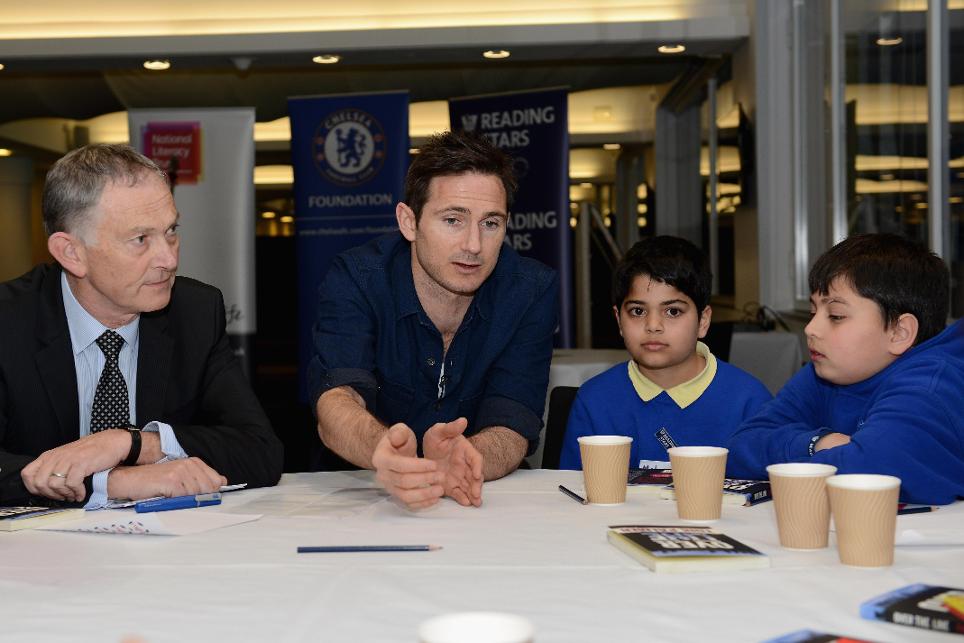 Youngsters get to try out literacy initiative at Stamford Bridge launch

Over the last 11 years, the Premier League Reading Stars literacy programme has helped thousands of schoolchildren develop a love of books and of reading.

At the launch of this year's initiative at Chelsea FC last Tuesday, teachers and youngsters who had not experienced the scheme before saw the impact the initiative can have.

Premier League Reading Stars is a partnership between the National Literacy Trust (NLT) and the Premier League. It is funded by the League and Arts Council England and taps into children's love of football to encourage and motivate them to enjoy reading. Each Premier League club nominate a player who records a video talking about their favourite books as well as setting viewers reading challenges.

These videos support the 10-week scheme, which is run in 1,000 schools and libraries across the country and involves Premier League-branded pens, badges, reading journals and wall charts. Premier League Reading Stars is open to all youngsters but has had a particular effect on boys, who can struggle to get enthused by reading.

NLT research last year showed the reading intervention programme to be very effective. Three out of four children made at least six months' progress in just 10 weeks and one child in three made a year’s progress or more; nearly nine out of 10 participants said seeing Premier League footballers read made them want to read more; the number of children in the programme who read every day doubled and seven out of 10 said that they were now proud to be readers.

The schools involved in the launch at Stamford Bridge, having seen it in action, are looking forward to using it in the classroom.

"I am really excited about starting the programme," said Catherine Taylor, assistant head of St Augustine's Primary School in Westminster. "I can see that there is an excitement about them wanting to go on and read.

"Using the Premier League and the players will have a huge effect on the children, inspiring them to read. Quite often it is difficult for boys to find things they like. Football is unique in how it can engage young boys because nothing else dominates their lives in that way. They love it. It's what they discuss in the playground, it's what they want to be when they grow up, it's everything for them. So if they can love reading about football, that's the key."

St Joseph's Primary School, in Wandsworth, near to Stamford Bridge, also plans to use the scheme and Lisa Marie Sheppard, the school’s art co-ordinator who is also a one-to-one English tutor, believes it will make a big difference.

"As soon as I saw it I signed up for it," Sheppard said. “It's going to be brilliant. I have already started using ideas and games I picked up from the Reading Stars training course with some Year 6 children and I have seen a big impact. For three of my key pupils their reading has picked up in a matter of weeks."

This year's launch was a star-studded affair and gave the youngsters there the opportunity to speak to Chelsea and England midfielder Frank Lampard, and Cressida Cowell, the author of the "How To Train Your Dragon" series, the children's football author, Tom Palmer, and Premier League Chief Executive Richard Scudamore.

As well as hearing from the special guests about their love of books and how they got into reading, the children also took part in a fun football literacy quiz, received signed photos and books and were taken on a tour of the stadium.

"It was really exciting meeting Frank Lampard," said Destiny Scully, 9, from St Joseph's. "It makes me want to read more because he's a really good footballer and he is an inspiring person to be with."

Lampard, who has written a series of children's football books, enjoyed his time with the pupils and helping them to get involved in reading.

"I do enjoy interacting with the kids, it's something that I have done since writing books, and one of the best buzzes I have got from the whole experience is sitting with them and talking about reading," Lampard said. "This is about us as players trying to help kids to read more.

"You need to enjoy your reading and I know it's not always easy as a parent or as a kid to sit there and read with all the other things you can do in the modern day but if, as players, we can show that kids can enjoy it, show what a base it is for them in an educational sense, then we are doing our job."

Cowell is particularly keen to get boys interested in reading and writes with the idea of a father reading to his son in her mind. So for her, the idea of using the Premier League brand to bridge the reading gender gap can only be a good thing.

"This is an amazing scheme and it works," she said. "Some of the statistics are incredible. For the kids it is so important to have the involvement of Premier League players.

"These footballers are heroes to the kids and having them involved says to boys, 'Reading is cool, my hero reads.' So a child who isn’t reading will start reading. For the kind of children we are trying to get at, boys, there’s nowhere else where you can find those kind of heroes but at the Premier League. It's incredible that these young footballers are prepared to give their time and give back by doing this.

"I see so many bright boys with so much to offer fall behind in school because they are not reading for fun, or they might have a reading difficulty. If you can get those kids reading, all the research shows is that their performances shoot up in school. They attain better, they feel better about school and you are on a positive circle."