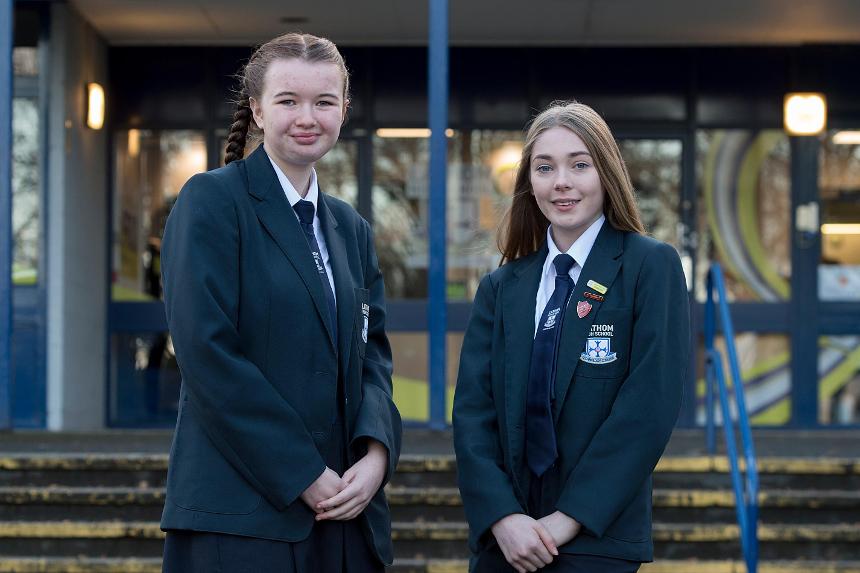 If you were to look at the ease with which Lily and Charlotte take assemblies at Lathom High School near Wigan, you would not have guessed the Year 10 students once feared speaking in front of an audience.

The 14-year-olds admit lacking self-confidence but that changed last year when they took part in the Premier League Enterprise Challenge (PLEC).

"Maybe I was selected because they knew my confidence wasn't the best of my abilities," Charlotte says. "I was so nervous, because I wasn't good at standing up in front of crowds or talking to anyone."

Lily (pictured above, left) and Charlotte (right), and the team, came up with plans to meet a business brief set by Premier League Executive Chairman Richard Scudamore.

And as the proposals started to come together, Lily and Charlotte's personalities began to grow and develop.

"I started to get involved in the business-type work we were doing," Charlotte says. "I really enjoyed talking about the finance side and I really enjoyed presenting in front of crowds. That was a surprise."

Lily adds: "Nobody knew anything about it. But once we started working as a team, all the ideas came together and we started to enjoy it."

Their presentation impressed the judges at the DW Stadium heats and the Lathom High School team were Wigan Athletic's representatives at the national semi-finals at the Etihad Stadium.

The team did not progress to the final, but the experience has had a lasting impact.

"I would never have stood up in front of a crowd before doing the Challenge and now everything's changed," says Charlotte.

"Now I do assemblies at school, and I hosted this year's PL Enterprise Challenge heat at Wigan."

The head teacher of the school near Skelmersdale, Jane Galbraith, has also seen the transformation.

"They've been unrecognisable from those little girls who stood up and shook the first time they presented in the heats," she says.

"At 14 years of age, it makes them stand out from the crowd - that they've already done this.

"You look at them and think they will be highly successful adults. They will secure good employment opportunities. They'll put themselves forward."

Charlotte and Lily have been mentoring Lathom's PLEC team that represented Wigan this year and it helped them to go one better than last year's team and qualify for the final in April.

Thanks to PLEC the pair have also started a GCSE course in Business with Wigan, studying at the DW Stadium.

"As soon as we were asked to do the course we both said yes straightaway, because of how much we loved doing the Challenge," says Lily. "The finance side has really helped us with our course. It makes it a lot easier for us."

Charlotte adds: "I'd never even heard about business before the Challenge and being a part of that has really opened new doors and different opportunities now.

"It's helped with other classes too, because in different subjects I have to create a presentation and present it in front of the class. It's really given me confidence to do that."