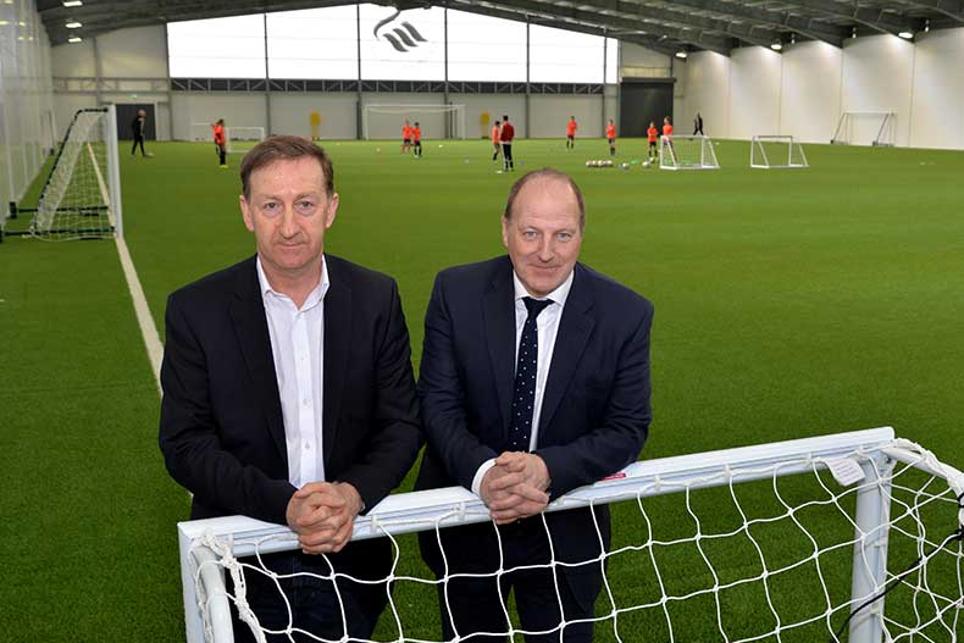 The £8.5million investment into Swansea City’s Landore academy not only offers their players some of the most luxurious facilities to enhance their progress in, it also provides a base from which the club are reaching out into the local community to maximise their youngsters’ educational welfare.

It crowns and mirrors the work the club are putting into developing their stars of tomorrow as they bid for Category One status.

Such a status would allow them to work within the top end of the academy game, according to the Elite Player Performance Plan established in 2012, which aims to increase the amount of top home-grown talent playing in the Premier League.

A new indoor barn with a 4G pitch will allow Swansea’s players from the ages of nine to 21 to train all year round while a third tier to the building, opened in 2013 by Premier League Executive Chairman Richard Scudamore, includes new classrooms, offices, a parents’ room and a lecture theatre with full match-analysis features and a 3G carpet.

"The future of our academy is vital for the long-term future of the club," Jenkins said. "Apart from these facilities on show, we have made a massive investment in staffing levels throughout the many age groups.

"It’s a step made possible by our rise from the foot of the Football League to the best league in the world."

"We are determined to look after our youngsters, the vast majority of whom come from our local community, and provide them with the very best coaching and well-being advice that is available."

Swansea’s rise from the lower divisions has meant breaking new ground to enable its academy to keep up. Staffing within the academy has more than doubled since Nigel Rees, now academy manager, arrived as operations manager in August 2013, when Jenkins oversaw the establishment of an academy building to replace a cricket square.

"It is a massive step forward for the club,” the chairman said then. “It’s a step made possible by our rise from the foot of the Football League to the best and most lucrative league in the world.

"It has certainly helped us develop as a club on and off the field and this facility is testament to that.”

By doing so Swansea are offering primary-aged children a balanced and welcoming environment, one that reflects their school experience, where the vast majority of teachers are female. Logic suggests that the kids will feel more comfortable and be more likely to develop their skills freely.

The club’s investment in staff has allowed Rees to send coaches into schools with a dual purpose: to deliver a football curriculum while supporting primary clusters; and to go in to primaries and observe how pupils learn in the classroom and how teachers deal with differentiation before bringing that understanding back into the academy in the evenings.

Rees points out that Swansea are in the top four of value-added results at GCSE level.

"In Wales, 85% of primary-school teachers are female,” said Rees, who spent 28 years in education while starting to work part-time for Swansea in 2009. "Then boys come into a male-dominated environment in academies. So I wanted to address this.

"If I could get some well-qualified female coaches in, that would help the Foundation phase [5-11] of my academy and give the lads different sorts of support as they adapt to a new environment.

"It’s broken down barriers and changed the dynamic in the academy, while bringing in good coaches in their own right. We meet parents every six weeks for the children’s review and we’ve had very positive feedback, that the players feel comfortable, just as they’ve got 'Miss' at school, they’ve also got 'Miss' coaching them.”

Nia Davies, a UEFA B coach, joined the club full-time two years ago, initially as a co-ordinator to set up a Swansea girls programme that has led to a sixth-form scholarship partnership with Neath College. She also helps lead Swansea’s Under-10s, while Abbie Sadler co-coaches the Under-9s and helps the pre-academy group.

Davies, who is in the third year of a Sports Science degree at the University of South Wales, has thrived, overcoming any initial reservations.

"As the boys come in, sometimes at the beginning it’d be, 'A girl coach, are you sure?’” she said. "But then once they realised you knew what you’re doing, they were clearly comfortable.

“Last season, we took the Under-9s to Poland. They were massively out of their comfort zone, leaving their parents, going abroad, but having male and female coaches there helped them settle.

"Not every lad needs a female adult around but it offers a balance. At bedtime, being away from home, could be a bit scary, but we were able to make them feel at home. We’ve seen a massive growth in those players.”

Davies, 26, who used to play for the Welsh side TNS, believes there are still barriers in football for women but has been treated on her own merits at Landore.

Swansea have a female masseur, physio and kit manager at first-team level.

"The facilities here rank up there with the very best. This is a Category One environment in every respect."

Gaining Category One status would enable them to play in the best games programme (the Premier League has allowed them to play in it this season while improving facilities and staffing), to maximise funding and to recruit from beyond a 90-minute radius.

Swansea had three development centres, for the level just below academy, when Rees arrived. Now they have 19.

Rather than training on local beaches or on council-rented pitches “full of stones and sand with dogs running around” according to Swansea Under-18 goalkeeper Lewis Thomas, they can now afford to operate in the best possible environment.

“The facilities now give me far greater opportunity to devise programmes where we can work and coach more creatively and innovatively,” Rees said. “The chairman is intent on us becoming one of the best academies in the world and he wants to do that for the benefit of Swansea City.”

Rees has given Jenkins photographs of every academy team. In ten years, he plans for them to be showing first-team faces.

“The facilities here rank up there with the very best,” Roddy said. “This is a Category-One environment in every respect. This feels like a proper football environment, and a good place to come and learn your trade.

“Here we are now, with state-of-the-art facilities and an academy which is clearly on the up. While the new buildings have been going up, the work with the players has been going up too.

"You can see Swansea players and teams are getting stronger. The first time I came the academy boys were running on the beach because the club couldn't hire any pitches that day. But now the excuses have all been taken away.

“It’s now a question of making sure the players stay hungry and stay on the path to the first team.”

Pete Lansley (@PeteLansley), a football reporter for the Sunday Times and the Guardian, is a Level 2/Youth Module 3 coach working with Derby County Community Trust and an FA Coach Mentor.