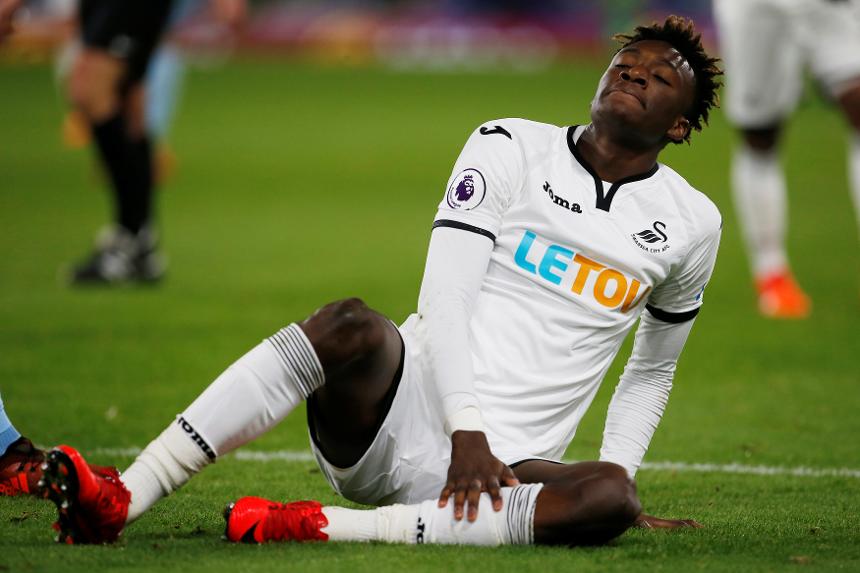 The most popular budget forward in Fantasy Premier League is a doubt for Swansea City's home match with AFC Bournemouth as the 19:00 Friday deadline for Gameweek 13 looms.

But Swansea's top scorer with four goals is rated "50-50" by head coach Paul Clement after going off in Gameweek 12 with a back injury.

His 15% owners have a dilemma, because Abraham cannot play against his parent club, Chelsea, in Gameweek 14, next Wednesday evening.

Clement could hand Wilfried Bony (£5.7m) his first start since Gameweek 7 should Abraham fail to recover.

One budget striker option definitely out of the weekend is Oumar Niasse (£5.0m), whose two-match suspension begins with Everton's visit to Southampton.

The forward was bought by 147,000+ FPL managers this Gameweek before his ban, having returned 19 points across his previous two appearances.

But with five goals and an assist in his seven outings, Niasse could still be an option when he returns for Gameweek 15.

From that point, five of his next seven matches score only two in the Fixture Difficulty Rankings (FDR).

Manchester United are without Phil Jones (£5.5m) and Eric Bailly (£6.1m) for the visit of Brighton & Hove Albion.

Sales of Jones have escalated ahead of a busy schedule of fixtures.

He was transferred out by more than 159,000 managers after missing last week’s win over Newcastle United and is the second-most sold defender in the Gameweek, with a further 135,000 losses.

Having started each of the last six Gameweeks, Chris Smalling (£5.4m) looks set to be partnered by Victor Lindelof (£4.9m) or Marcos Rojo (£5.4m) as United seek a ninth clean sheet of the season.

Jose Mourinho has also revealed he will continue to manage the pitch time of Paul Pogba (£8.0m) after the Frenchman returned from injury in Gameweek 12, with 69 minutes against Newcastle, during which time he produced a goal and an assist.

Zlatan Ibrahimovic (£10.0m) will continue to earn minutes off the bench as he steps up his own return from injury.

The Swede offers an option in the No 10 role or up front if Mourinho looks to rest Romelu Lukaku (£11.5m), who has played every minute of the season.

There is mixed news in defence for Manchester City and their trip to Huddersfield Town.

Pep Guardiola’s side will be without the injured John Stones (£5.7m), but Nicolas Otamendi (£5.8m) returns from a one-match suspension.

Otamendi was the most-sold player (358,000) in the previous Gameweek and is likely to be joined in the back four by fit-again captain Vincent Kompany (£5.8m).

Before missing out against Leicester City last weekend, Otamendi had more FPL points (56) than any defensive team-mate, and had topped the overall defender standings.