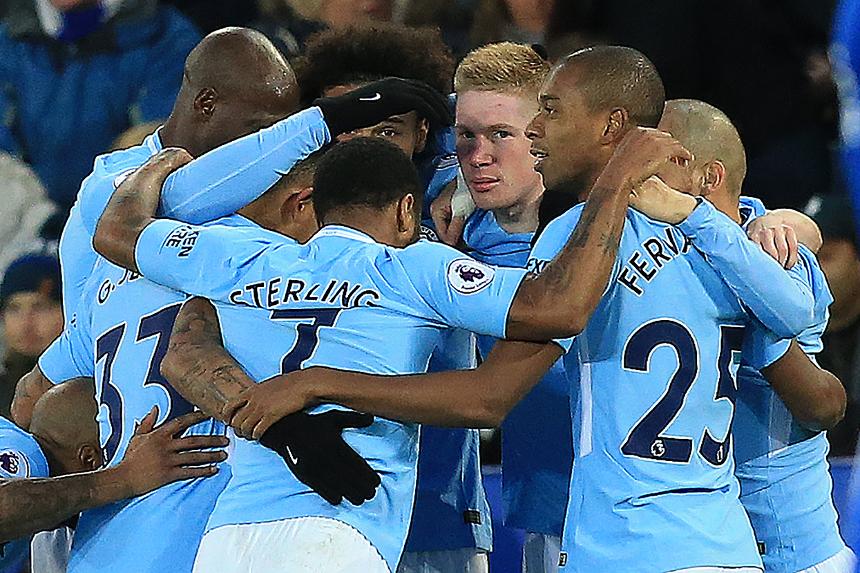 Manchester City's title quest continued its relentless pace with a 2-0 win at Leicester City that extended their record for the best start to a Premier League season.

With a trip to Huddersfield Town next up, on Sunday, we look at what other Premier League records are in danger from Pep Guardiola’s team over the next month or so.

Most consecutive wins in a season – 13

They would equal the record by beating Huddersfield (A), Southampton (H) and West Ham United (H).

If Man City do win their next three matches, a Manchester derby at Old Trafford will afford them the chance to beat the mark above and equal Arsenal’s overall record of 14 consecutive league victories, achieved between February and August 2002.

Three points at Old Trafford would then mean that beating Swansea City at Liberty Stadium on 13 December would set a new mark of 15.

Most consecutive away wins – 11

The victory at King Power Stadium was Man City’s seventh in a row on the road, having won all six of this campaign after a 5-0 win at Watford on the final day of last season.

If they claim victories at John Smith’s Stadium, Old Trafford and Liberty Stadium, three points at Newcastle United on 27 December would equal the 11 consecutive away wins set by Chelsea between April and December 2008. It would also set them up for beating the record at Crystal Palace four days later.

The mark of 30 wins in a season, which champions Chelsea set last term, is attainable, as are several other more longer term marks held by the Blues.

Having been held by Everton at home in Matchweek 2, City need to win all their remaining matches at Etihad Stadium to equal the record of 18 home wins in a season. That is held jointly by Chelsea (2005/06), Manchester United (2010/11) and Man City themselves in (2011/12).

If Man City's form of 12 matches was extended through to the season’s end, Chelsea’s records for most goals and points in a season would fall too.

Mourinho’s 2004/05 vintage racked up a record 95 points on their way to the title but City’s 34 would, extrapolated over a season, total more than 107.

But a busy set of fixtures over the next few weeks are set to test City, starting with the trip to a Huddersfield side who have already shocked one Manchester club this season. The Terriers ended United’s unbeaten start to the season with a 2-1 win in Matchweek 9 last month.

A Manchester double would be all the more stunning for David Wagner’s team and preserve a few records held dear by fans in London.