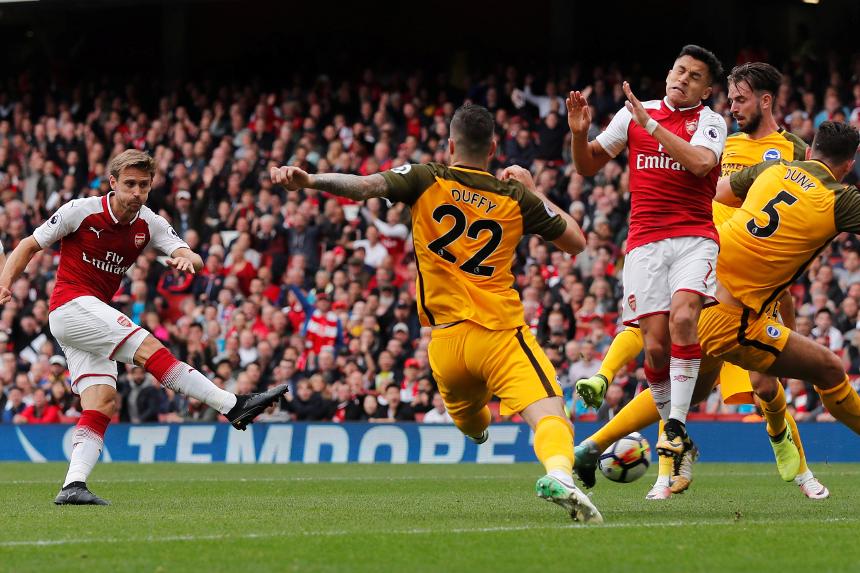 When Fantasy Premier League managers see their players shoot, they hope for one outcome: a goal.

However, even if that shot is blocked or saved, it can still be rewarded in FPL.

In the second part of a series analysing FPL assists, we look at how shots can play their part, showing how the rules are applied.

In awarding assists for a blocked shot, touches from defenders play a key role.

Players who have their shots saved, blocked by a defender or denied by the woodwork can earn an assist if the ball then falls to a team-mate to score.

Touches or deflections from an opponent before the rebound do not cancel out the assist, unless there is more than one that significantly changes the trajectory or power of the shot.

If an opponent makes a significant touch after the first initial block and before the goal is scored, no assist is awarded.

For Nacho Monreal's opening goal, pictured above, Hector Bellerin's shot is blocked by a defender. The ball diverts to Monreal, who converts. The assist, therefore, went to Bellerin.

However, it is crucial the action leading to the block or rebound is deemed a shot.

In Gameweek 5, for Steven Davis's goal for Southampton at Crystal Palace, no FPL assist was awarded because Dusan Tadic's ball into the area was recorded as a cross and not a shot.

Wayne Hennessey's touch alters the intended destination of that cross, which was identified as Shane Long or the near-post area.

A player cannot earn an assist when scoring after their initial shot has been blocked, saved or has struck the woodwork.

Indeed, when a player scores from a second attempt, no assist is awarded to the team-mate who provided the pass or cross.

We saw this in Gameweek 11 with Alex Oxlade-Chamberlain's goal at West Ham United.

The Liverpool midfielder’s initial shot was saved by Joe Hart before he converted the rebound.

Roberto Firmino provided the pass to Oxlade-Chamberlain but was denied an assist because the scorer failed with his first attempt.