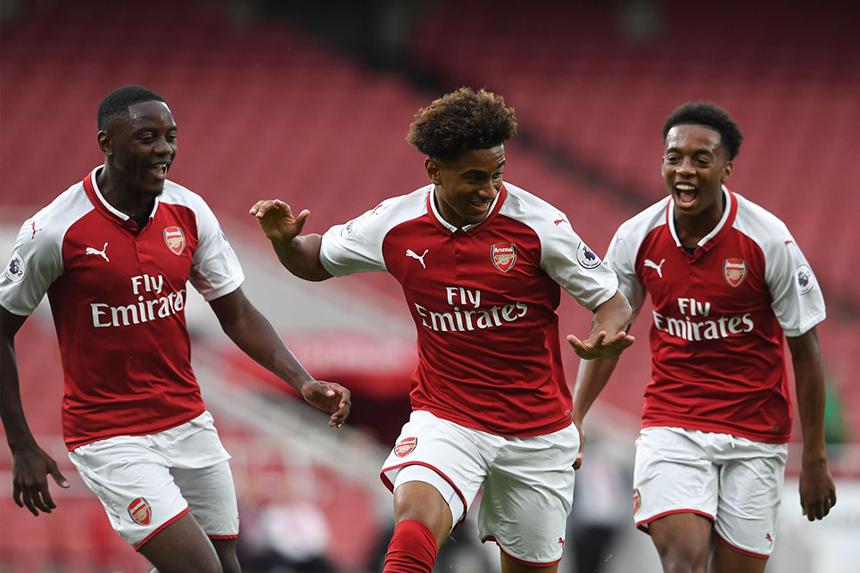 Teenage pair score twice each as Gunners beat Man City 4-3, with both teams getting a man sent off

‘You could see straight away Reiss is special' External Link

Reiss Nelson and Eddie Nketiah both scored twice as Arsenal kept up their winning start to the Premier League 2 campaign with a 4-3 victory over Manchester City.

Arsenal went 2-0 up inside 14 minutes when Nelson, a 17-year-old winger, finished a slick team move before 18-year-old striker Nketiah (pictured above left with fellow goalscorer Nelson, centre) slammed in from close range.

Matt Smith pulled one back for Man City just after the half-hour mark, before England midfielder Jack Wilshere, making his comeback from injury, teed up Nketiah for his second on 37 minutes.

Nelson’s smart finish made it 4-1 before Tyreke Wilson and Wilshere were both sent off for an altercation after the former’s late challenge.

Brahim Diaz’s goal and a Lukas Nmecha penalty made it 4-3 with 18 minutes remaining, but the Gunners held on to go top of PL2 Division 1.