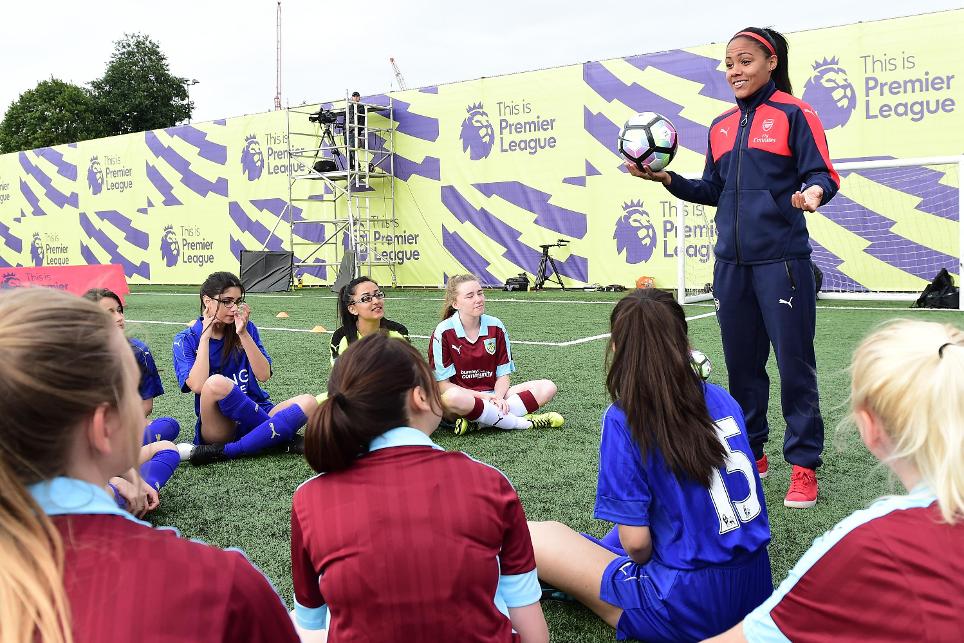 This week, more than 40 teams from around the country will travel to The FA's National Football Centre at St George's Park to compete in the Premier League Girls Football National Festival.

The two-day event celebrates the work of the PL Girls Football programme and ahead of the competition, Arsenal and England Ladies defender Alex Scott, currently in the Netherlands competing in the UEFA Women's European Championship, talks about her journey in the game and what the Premier League Girls Football Tournament﻿ will mean to those taking part.

"My older brother used to play football so I was always rushing home from school to play with him and the boys where we lived in the East End of London.

"I knew what the attitudes were at the time. My mum's friends would say, 'don't worry, she will grow out of it' when they were told I wanted to play football when I was older.

"We had a community five-a-side tournament in Tower Hamlets and I was the only girl playing. One of the referees knew the manager at Arsenal Ladies at the time and introduced me - I didn't even know there was women's football back then - and I was signed up as an eight-year-old.

"The dream was to play at Wembley. I wasn't thinking back then it was going to be my career. To sign for Arsenal was amazing, it was a dream come true.

"I loved playing football. Instead of hanging on the street corners in east London and doing nothing, I was making my way to training, being part of the team and it was giving me more skills than doing nothing with my time.

"All my focus was just being the best footballer I could be.

"In 2004, I made my England debut. I was called up on standby for a match against Holland and I ended up coming on at half-time.

"I was so proud and I ran so hard, I didn't want to let anyone down. I have not looked back.

"I have won trophies with Arsenal, played for England, the Boston Breakers in America, and Team GB at the London Olympics. I feel so lucky and thankful.

"Without football I don't know what path I would have taken. I grew up on an estate so it could have gone in any direction. I have won a lot, I have got to travel the world and there's so many highlights.

"There were people who didn't believe I would make it to the highest level, I have had setbacks along the way. Football has given me so much so I never want to let people down.

"Attitudes have completely changed towards women's football. It's amazing that young girls have the opportunity to be a professional footballer.

"At grassroots level the women's game has grown massively. We were lucky if we could enter a five-a-side tournament with five girls playing, let alone a tournament being held at St George's Park with 40-odd teams taking part.

"It will give the girls a lot of confidence to be part of a team and be around like-minded people. Football gives youngsters so many life skills and I would encourage every young girl to take up a sport.

"Being at St George's Park for the Football Festival will give the players the appetite to want to go on and play at the highest level they can.

"They will see the facilities and the professional environment. It's a taster and they could be there when they are older if they put in the work.

"To the girls playing, my advice would be to believe in yourself. No-one ever has the perfect journey. There will be ups and downs but you have to remember why you started and go out there and have fun.

"Because young girls see us more on TV now, it's OK for them to want to be a footballer. They are aspiring to be like us now.

"It's great for the women's game and the girls taking part that the Premier League and The FA are supporting this. It's going to be a fantastic couple of days."