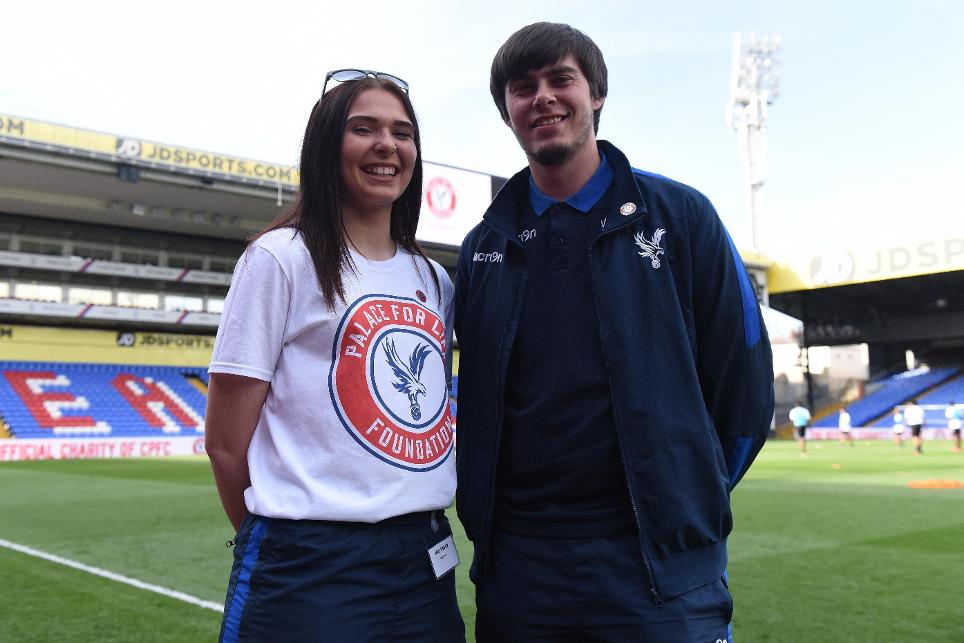 Growing up on the Stroud Green Estate, not far from Crystal Palace's Selhurst Park home, was not the easiest time for Angel O'Dwyer.

"Our parents never allowed us to come to the park because quite a few drug addicts used to live here and there would be needles and broken bottles," she says.

While she was studying for her GCSEs, Angel's sister died after a holiday accident in Greece. The tragedy had a big impact on Angel's behaviour.

"I was fighting a lot. I kept getting excluded and I was lucky to get back in.

"The teachers told me, 'You are going down this path which none of us want you to go down. We are scared for you, that you might even be dead within the next year.'"

In an attempt to steer her in the right direction, a teacher introduced Angel to the Premier League Works programme run by the Palace for Life Foundation, in South Norwood, the charitable arm of Crystal Palace FC.

CPFC Foundation has become the Palace for Life Foundation and at the event to celebrate the relaunch, Angel explained how her rehabilitation "was not all rainbows".

"At first I thought that wasn't for me. I just wanted to be out with my friends. I felt I was there because I had to be."

She did not turn up for her first PL Works session while on the occasions she did go, she would arrive late.

"The Foundation did not give up on me," she says. "They would ring me and ask if I was coming in. That is when I knew the Foundation were going to be there for me.

"I realised that these people cared and I started wanting to be there because someone actually believed in me and thought I could go further."

With the Palace for Life Foundation providing encouragement and support, Angel has not looked back. She began volunteering as a coach with the Foundation and was selected to visit Barcelona to gain work experience.

Her development has not stopped there. Last year, Angel completed her FA Level 1 coaching course and is now a sessional coach with the Foundation, working on projects such as Premier League Kicks and helping young people who are in the same position as she was.

"It's about giving the young people that chance. Rather than them thinking, 'I am going to go out and commit criminal damage', they are thinking, 'Today I am going to play some football.'

"Sometimes at the sessions, they just want someone to talk to. It's important that you give them that time because if you don't, you don't know who else will."

And when looking back at her own progress through PL Works, Angel is candid about where her life would be without the Foundation's support.

"Most likely I would be in prison. Where we live, a lot of us young people are misunderstood.

"The Foundation gives us hope. They make sure that you know that the past in the past and the future is what you make it."

See: 'Foundation were always there for me'