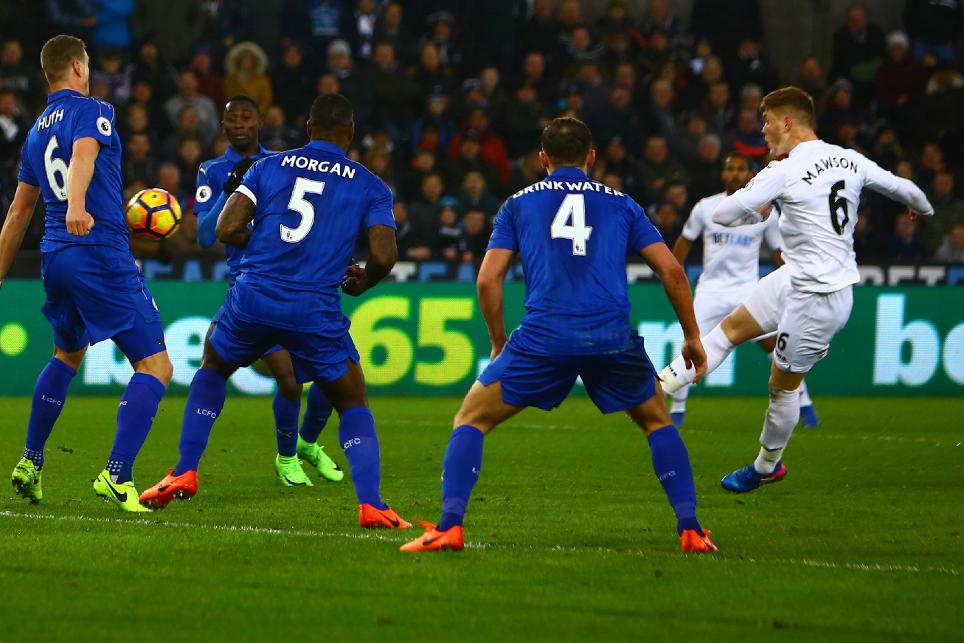 Defender emerging as leading FPL differential after only 0.3% of managers are rewarded by a third goal of 2017

Ranieri: We Have To Find A Solution External Link
Two-goal haul adds to Sanchez dilemma

He scored the Swans’ second goal, while also making seven CBI, six recoveries and providing a pair of open-play crosses to tally 40 in the BPS.

Federico Fernandez (£4.3m) made it a clean sweep for Swansea defenders at the top of the BPS with a score of 38.

The centre-back provided the assist for Mawson's opener and totalled 11 CBI and three recoveries as he played his part in a first Swansea clean sheet since Gameweek 15.

Olsson topped the ICT Index with a score of 10.4. The defender created two chances from five attempted crosses.

Since his arrival at the club, he has supplied a total of 13 crosses, second only to Gylfi Sigurdsson (£7.5m) for the Swans ranks over that spell.

With Threat and Creativity scores of 34 and 32 respectively, Sigurdsson recorded 8.2 overall in the Index.

The Icelander produced five goal attempts - three coming from inside the box - and created two chances.

Owned by a mere 0.3% of FPL managers, Mawson was identified as one of our differentials ahead of Gameweek 26.

Following Sunday's impact, he has now emerged as a leading budget defender.

While a Gameweek 26 visit to leaders Chelsea could calm investment, Swansea's schedule, including home encounters against Burnley and Middlesbrough and a guaranteed fixture at Hull City in Gameweek 28, is likely to accelerate interest in Mawson.

The top transfer target ahead of Gameweek 25 with 229,000+ FPL managers swooping for his services, Sigurdsson failed to continue a run that had reaped goals in three successive matches.

But an assist for Olsson's goal was reasonable reward for his new owners and, as master of all Swansea's set-pieces and penalties, he remains a key target.

For Leicester, the performance of Demarai Gray (£4.8m) provided a positive from their latest defeat.

Gray started the match in a central-attacking role behind lone striker Jamie Vardy (£9.6m), before switching to the left wing in the second half. He created three chances and completed nine of 15 attempted dribbles - more than any other player in Gameweek 25 so far.

An improving schedule from Gameweek 27 may yet see FPL managers consider Gray if he maintains that recent form.