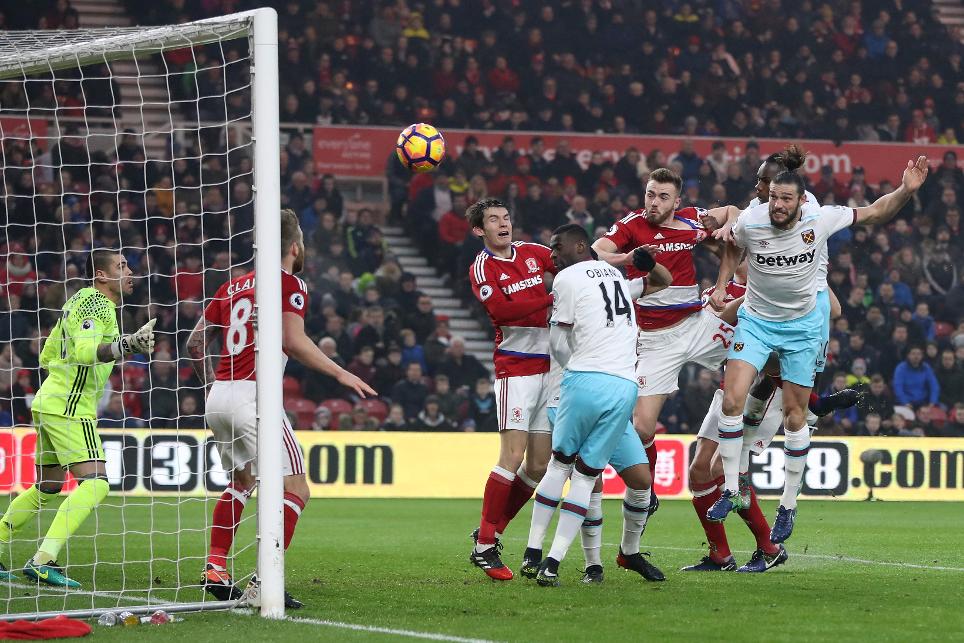 With four goals in as many starts, only one FPL forward is more in-demand than West Ham striker

With seven clearances, blocks and interceptions (CBI) also contributed to his side's victory, Carroll tallied 63 in the Bonus Points System (BPS), the highest total of Gameweek 22.

The midfielder also completed 86% of his 43 attempted passes and won two tackles, securing a total of 37 in the BPS.

Middlesbrough's Calum Chambers (£4.5m) provided the assist for Cristhian Stuani’s (£4.7m) goal and picked up the final bonus point on offer with a BPS score of 34.

Switching to right-back from his usual position in central defence, Chambers won a pair of tackles, made nine recoveries and completed 98% of 43 passes.

As the dominant attacker on show, Carroll registered the highest ICT Index score of the match, with 16.4.

He produced a Threat score of 70, thanks to two converted efforts from inside the box.

Lanzini gave chase to his team-mate with an Index score of 15.4.

The playmaker delivered the highest Creativity score on show at the Riverside Stadium with 63, providing 16 passes in the final third and creating five chances.

Carroll’s FPL stock is now gaining momentum on the back of four goals in his last four Gameweek starts.

With more than 36,000 new owners, only Chelsea's Diego Costa (£10.3m) has attracted greater interest among forwards since Saturday's deadline.

Home fixtures against Manchester City and Chelsea over the next five Gameweeks will provide a test for Carroll's form, though the target man is capable of troubling any defence if provided with service.

Lanzini, whose two assists helped him to a return of nine points for a second successive Gameweek, and Michail Antonio (£6.9m) will play a vital role in that respect.

They built on their Gameweek 22 returns with the assists for the Hammers' goals on Teesside.

Antonio was played up alongside Carroll in a 4-4-2 formation and remains the main draw in Slaven Bilic's midfield, though Lanzini's form warrants consideration.

For the home side, it was Chambers who again caught the eye.

The defender has averaged 6.7 points per match over the last three Gameweeks, earning bonus points in each, as he continues to provide FPL value.

Fabio (£4.4m) was somewhat surprisingly dropped to the bench by head coach Aitor Karanka, having started nine of the previous 10 Gameweek outings.

Bernardo (£4.3m) retained a starting berth in a back four but following defeat to the Hammers, Karanka could now consider a switch of formation and personnel ahead of the Gameweek 23 home meeting with West Bromwich Albion.