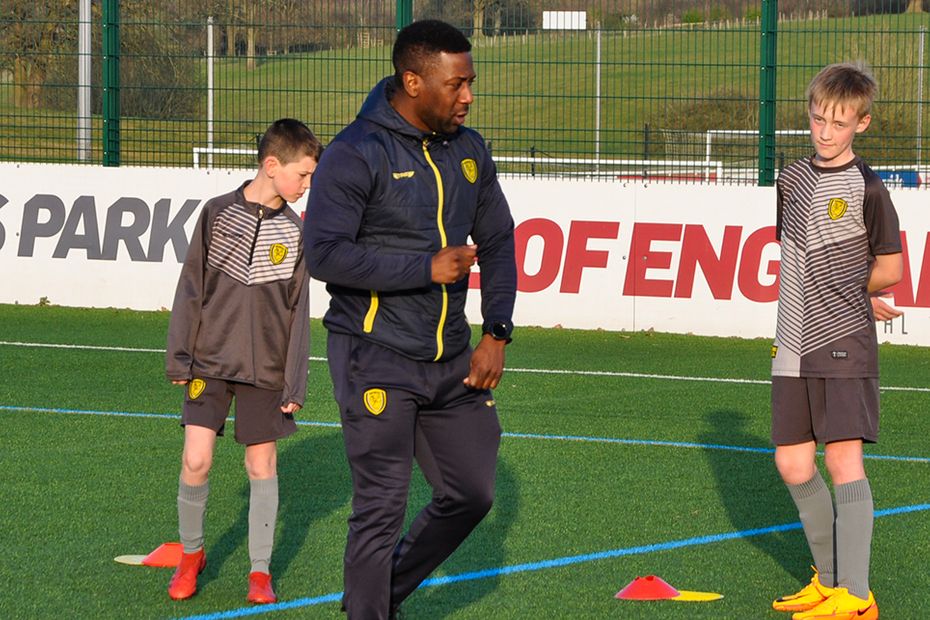 Pitt: Returning to football has been huge for me
Pitt: Player to Coach scheme vital for experience
American experience helps to broaden Gilkes' horizons

In 2020, former Portsmouth winger Courtney Pitt was one of the first intake of six coaches on the Premier League, EFL and PFA Charity's Professional Player to Coach Scheme (PPCS) which aims to increase the number of black, and Asian and mixed heritage players moving into full-time coaching roles.

Two years later, we caught up with him as he starts his new permanent role as the club's Head of Academy Coaching.

What does the job entail?

"When I started out on my PPCS placement, I was gaining experience in six different departments including Foundation, Youth Development, and the Under-18s in order to get a well-rounded behind-the-scenes view of how the Academy works. I then oversaw the U9s, U11s and continued to move through the age groups to gain further experience.

"The club saw my progress and how hard I had worked and this summer I was promoted to my new role as Head of Academy. It was great to know that the club have a sense of trust in me to put me in that position. I now oversee the whole programme so have a say in the Academy structure, oversee coaches, and help with the development of over 100 players from U9s to U16s.

"When I joined the PPCS my aim was to get a full-time job somewhere in football and the programme has helped me do that."

How is this different from the previous roles you had at Burton during your placement?

"I delegate and oversee the structure of how to do things, to make sure that the Academy is in line with the overall club philosophy and playing philosophy."

What are the biggest challenges in your role?

"In all honesty everyone seems aligned to help. Whether they become professional footballers or not, one of the key priorities is to ensure players have the necessary life skills that can be transferred so that if they don't make it into our first team, we have given them some skills in life to succeed.

"Only a tiny percentage of players get through their Scholarship, Academy and sign as a pro, so the emphasis on developing well-rounded people in the Academy is crucial."

How important has PPCS been in providing the placement within the club, alongside the development provision provided by the League?

"The scheme got me a position at a football club, which had been so difficult to do. I was given an opportunity of actually getting in to a club to show what I could do, ride the challenge, learn and develop in myself. The PPCS has been a huge help for me to get a foot in the door and supporting me as I develop. It's great to see new cohorts too, and important that the scheme continues to grow and thrive."

How important is it for a club academy to have more diversity among the coaching staff?

"It's so important to have a greater presence of minority groups, especially in leadership roles. You've got to be qualified, got to be the right person, however if you have the same group of people having the same conversations, you are never going to get a different perspective or ideas, it stays the same.

"Uncomfortable conversations need to be had sometimes because otherwise things won't change. There's a lot of players from different backgrounds and it's important that you can relate to them, and that they can relate to you."

What do you think about being one of six PPCS participants who have gone on to attain full-time coaching roles in the professional game?

"There's six of us who have participated on the scheme including Jon-Paul Pittman at Forest Green Rovers, Eric Odhiambo at Coventry City and Darren Byfield, who is now involved with the first team at Crawley Town. A lot of us have got full-time roles as we have had the opportunity to prove our worth. We have our own WhatsApp group and encourage each other, set challenges, discuss things.

"The encouragement and support we have given each other over the past two years has been amazing. We're like-minded people who want to progress, want to do better and want to help people. I am proud of each and every one of us."

What are your ambitions?

"I want to keep learning and improving. This has been a massive promotion for me and is a huge position. My first focus is on this role and hopefully in the next three to five years ideally see loads of Academy players make it through to the first team, or if not there, then in and around the Football League.

Before it didn't feel like there were many options and certainly not many opportunities, so progress has been made with schemes like PPCS. I hope that if players from minority groups can see me and others making headway, they will see the potential and opportunity to follow if that's what they want to do.

"If you can't see minority groups in leadership positions, and not just in football, it's easy to think that it's not attainable. I don't really see myself as a role model but if I can play a small role in helping others feel what I'm doing is attainable, then great.

"My priority though, is to help players develop and fulfil their dream of being a professional footballer in the first team. I know how special that is. If they don't make it as a professional, then my aim is to ensure that they are as well-equipped as possible, as a person, to work in a different environment."