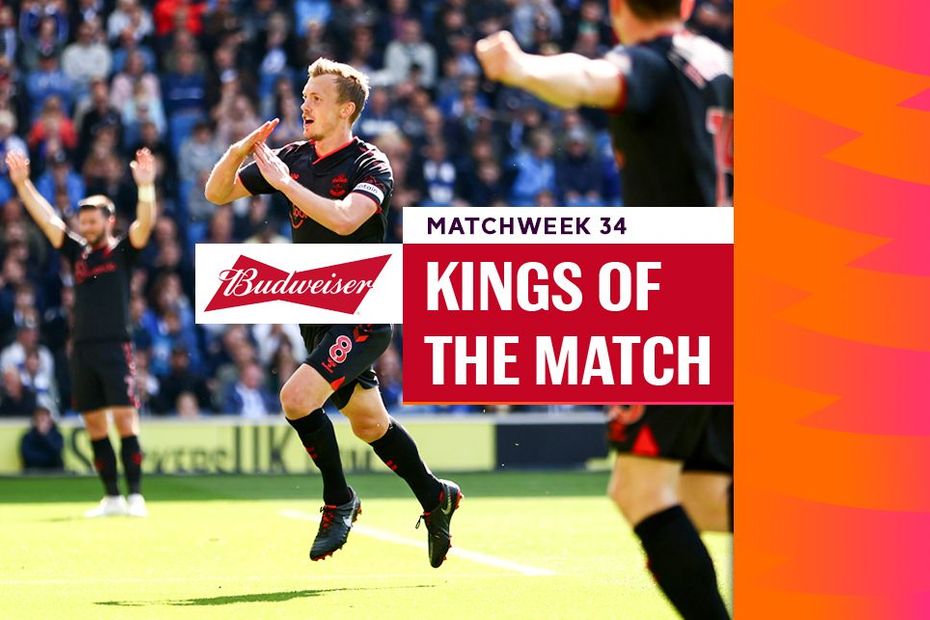 See which players have earned the backing of supporters, including Southampton's James Ward-Prowse

After the final whistles in Matchweek 34 of 2021/22, thousands of supporters have voted to crown their Budweiser Kings of the Match.

The winger was excellent again, with his shot leading to the opener, before he converted his second penalty of the week.

He kept a first clean sheet in seven matches and made a couple of key saves against Aston Villa to earn more than double the number of votes polled by his nearest rival Emiliano Martinez.

Marked his 100th Premier League appearance with a first-half brace to scoop an overwhelming 62.9 per cent of the vote.

Narrowly pipped Mads Roerslev to take the vote after a solid display in defence.

The Southampton captain again led by example, scoring stunners in either half to earn his side a point.

A commanding display, including two crucial saves, helped Burnley on their way to victory and out of the relegation zone.

The wing-back assisted Christian Pulisic to net a late winner, earning him the award ahead of the American.

Headed in his first home Premier League goal since September 2020 to open the scoring in the Merseyside derby and claimed more than three times the number of votes of any other player.

Made seven saves on the way to recording back-to-back clean sheets, beating Crystal Palace defender Joachim Andersen to the award.

The Manchester United striker scored his 17th Premier League goal of the season to earn his side a point against Chelsea.