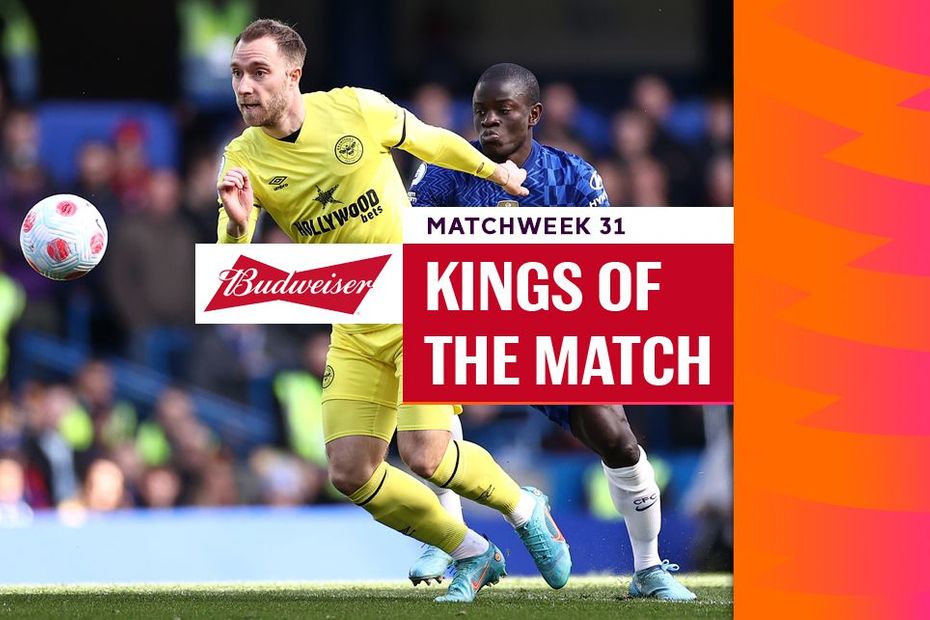 See which players have earned the backing of supporters, including Brentford's Christian Eriksen

After the final whistles in Matchweek 31 of 2021/22, thousands of supporters have voted to crown their Budweiser Kings of the Match.

The Portuguese star scored his 14th goal of the season and secured nearly three times the number of votes as any other player.

The Belgian scored his 10th Premier League goal of the season, reaching double-figures in a campaign for the second time, and claimed nearly 60 per cent of the vote.

He scored his first Premier League goal since 2019 as Brentford stunned Chelsea at Stamford Bridge.

Another trademark free-kick earned the Saints midfielder more than half of the vote against Leeds United.

The full-back scored for a second match running, pipping fellow goalscorer Ollie Watkins to the award.

Maddison provided a fine assist for Kelechi Iheanacho's headed goal and also had an effort of his own overturned.

The winger struck his ninth goal of the season to secure all three points for West Ham United.

Son scored one goal and created another in the thumping win over Newcastle United, taking almost two-thirds of the vote.

Produced two assists and helped Crystal Palace keep a clean sheet to earn the majority of the vote.

Created the opener and scored a late winner to boost Burnley's hopes of staying up.