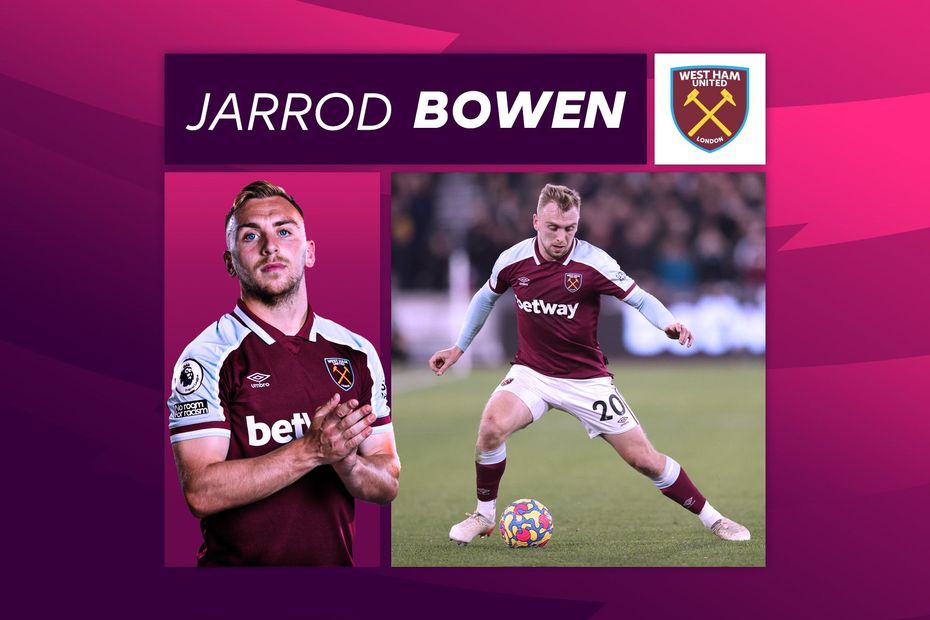 Bowen is developing into one of the most dangerous wide forwards in the Premier League.

The 25-year-old has been outstanding for West Ham United this season, producing 10 direct goal involvements (three goals, seven assists) at a rate of one every 159 minutes.

Tormenting full-backs down the right, as well as popping up inside the box as a supplementary striker, the speedy and skilful Bowen is a consistent menace.

While David Moyes’ side contain numerous attacking threats, their next opponents Crystal Palace will likely fear Bowen most.

One of Bowens’s great strengths is testing his markers with positive sprints.

Eager to stretch play, he makes more high-intensity bursts than any other West Ham regular and his pace provides a stern examination for whomsoever he is up against.

No one in Moyes’ squad attempts or completes more dribbles, and 24 of his ball carries this term have ended in a chance being created for West Ham.

Out of possession, Bowen is also happy to chase lost causes, and he especially enjoys closing down space for goalkeepers.

He won penalties against Watford and Chelsea by stealing in ahead of those opposition defenders who caught him with fouls inside the area.

The Hammers star has made three assists and scored twice in his last six starts in all competitions.

Last time out at Watford, he conjured up a pair of superb assists, playing a precise through-ball for Tomas Soucek before skipping past a defender to cut the ball back for Nikola Vlasic to score his first Premier League goal.

In a 3-2 loss at home to Southampton, the match prior, he also laid on a goal for Pablo Fornals after some skilful play down the right.

His eye for a killer pass has improved markedly this term, and is a reason why he has already made two more assists than he did in 2020/21.

As the club's only senior centre-forward, there is a lot of pressure on Antonio to deliver goals.

Moving in off the right to become a second striker – or standing in for Antonio when he is unavailable – Bowen is now easing the burden on their top scorer.

From a tactical perspective, Bowen is now comfortable switching roles with Antonio for short spells within matches.

This gives rival defenders something different to contend with and it also allows Antonio to mix up his runs and positioning.

In all the key metrics for attacking players, Bowen has shown he can keep pace with Antonio’s contributions, and that has been a real boost for the Hammers.

While it is unfair and premature to compare him with Liverpool's Salah, there are similarities in style between the two.

Bowen has been integral to West Ham's impressive season so far and will hope to deliver once more in Saturday's London derby.