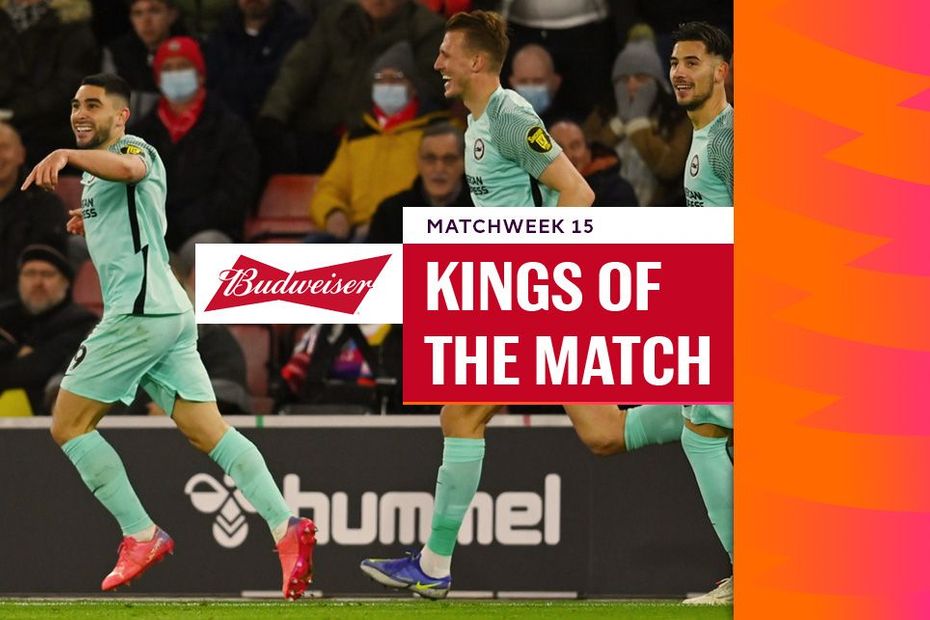 See which players earned the backing of supporters, including Brighton's Neal Maupay

More Maupay magic as Albion hold Southampton External Link
Who is suspended or close to a ban?

After the final whistles in Matchweek 15 of 2021/22, thousands of supporters voted to crown their Budweiser Kings of the Match.

See who came out on top in the weekend's matches so far, and click on the results below to find out how the voting went.

A brilliant strike from the West Ham United forward pulled his side level and set them on their way to a dramatic late win.

Scored the only goal of the match to give Newcastle United their first Premier League victory of the season.

Yet another late goal from the striker to earn Brighton & Hove Albion a point and give him 42.1 per cent of the vote.

The Liverpool defender was a constant threat down the right as his side earned a dramatic win at Molineux.

Two goals in another impressive performance helped the Portuguese poll 83.4 per cent of the vote.

Created Tyler Roberts' opening goal and looked dangerous whenever he was in possession.

A superb curling effort from the Brazilian proved the difference at Old Trafford and won him 71.5 per cent of vote.

A huge 78.8 per cent of fans backed the South Korean after he created one goal and scored another.

The centre-back's first two goals of the season came in either half to continue Steven Gerrard's excellent start at Aston Villa.

The winger played a key role in Everton's equaliser, hitting the crossbar as Richarlison followed up to score from the rebound, and he then scored a sensational late winner with a venomous strike.