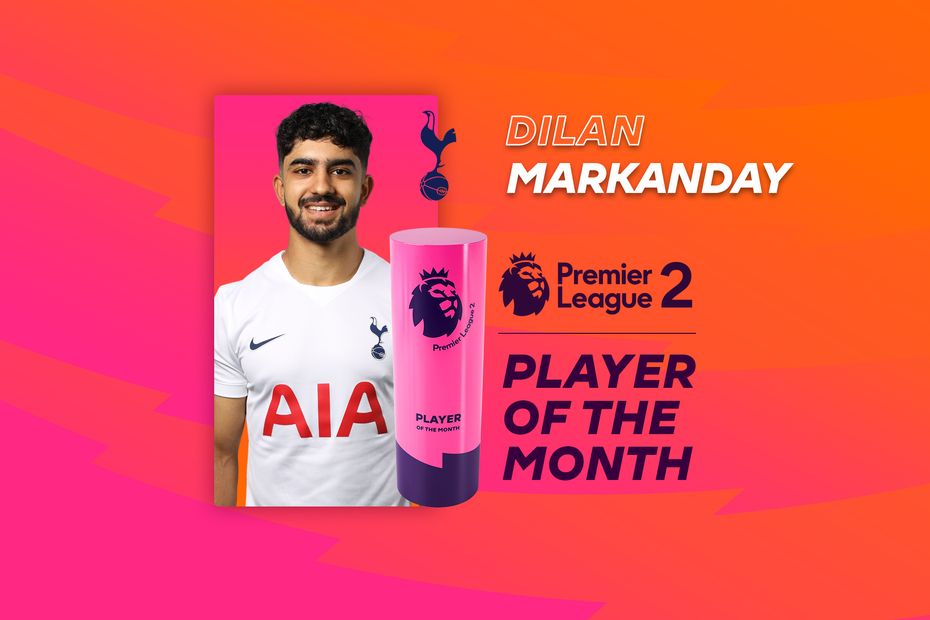 Tottenham Hotspur's Dilan Markanday has been named the Premier League 2 Player of the Month for October.

The 20-year-old attacking midfielder wins the award after a memorable month that culminated in an historic first-team debut.

"I'm really happy and proud to win this award," he told the club's official website. "I want to use it as added fuel and motivation to keep developing and working every day to improve.

"It feels really good to be recognised in this way, especially as there were a number of talented players from across the league competing for the award too.

"It's been a good month for me personally, but we've had a few good wins from a team perspective so I've been happy to be able to contribute to that and help the team on the pitch. Now I just need to keep going, keep improving and see what the future holds."

Appearing as a substitute in Spurs' UEFA Europa Conference defeat to Vitesse Arnhem, Markanday became the the first British Asian to play for the club's senior team.

A Spurs Academy product who was born in Barnet, north London, Markanday is also the first player of Indian descent to feature for their senior side.

In four PL2 Division 1 matches during October, he claimed four goals and an assist, which included a double at Manchester City and a stoppage-time winner against Manchester United.

Academy Manager Dean Rastrick added: "We're very proud that Dilan has won this award – he's a very grounded and intelligent young man who recognises what this Under-23 award means, but also knows the hard work that's still going to be required as he continues to develop with the overall aim of eventually transitioning into first-team football.

"We're obviously delighted that he recently made an important piece of history as the first British Asian to represent our first team in a competitive game – the challenge now is to keep developing and improving. We're all looking forward to seeing how he progresses over the coming months."

See: Nominees for October's 2021 Player of the Month