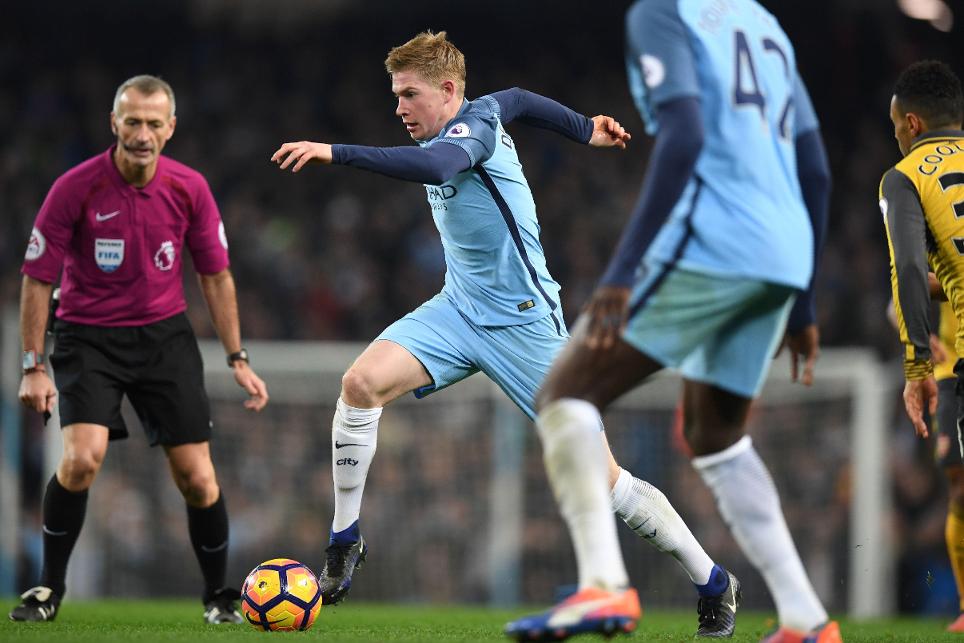 The winger supplemented this with four successful dribbles and five recoveries, in addition to completing 83% of 30 attempted passes, but his BPS total suffered as he was tackled on six occasions.

In addition to finding the net, Sane also produced five recoveries and a pair of successful dribbles.

De Bruyne also claimed top spot in the ICT Index with a tally of 15.5.

The Belgian fired three attempts on goal, with one shot on target, while a total of seven key passes helped him to a Creativity score of 102 – joint-top with West Ham United’s Dimitri Payet (£9.1m) for the Gameweek.

Sterling and Sane occupied second spot in the Index.

Sterling’s score of 10.7 was his highest haul since Gameweek 5. The City winger produced three of his four attempts from inside the Arsenal penalty area and was joint-top for touches in the box (eight) in Sunday's contest.

De Bruyne’s creativity continues to remain key for Pep Guardiola’s side; he has 11 assists for the season, already bettering his haul from 2015/16 and seven more than any team-mate.

Silva has also improved his consistency in the absence of Sergio Aguero (£12.8m). The Spaniard’s assist means he has produced FPL attacking points in all three Premier League matches without the striker.

Aguero will serve the last of a four-match ban on Boxing Day and will be available for the Gameweek 19 trip to Liverpool on New Year’s Eve.

At the back, Guardiola rolled out an unchanged line-up for the first time this season, with John Stones (£4.8m) named on the substitutes' bench for the second successive Gameweek.

For Arsenal, Theo Walcott's (£7.8m) early opener was his third strike in the last five rounds of fixtures.

The winger grabbed an eighth goal of the season, courtesy of an Alexis Sanchez (£11.8m) assist, to strengthen his claim as a viable double-up option alongside the Chilean ahead of some kind forthcoming fixtures.

The Gunners’ next six matches score a total of just 11 in the Fixture Difficulty Rankings (FDR).

In this promising run they entertain West Bromwich Albion, Crystal Palace, Burnley and Watford, with trips to AFC Bournemouth and Swansea City also on their schedule.