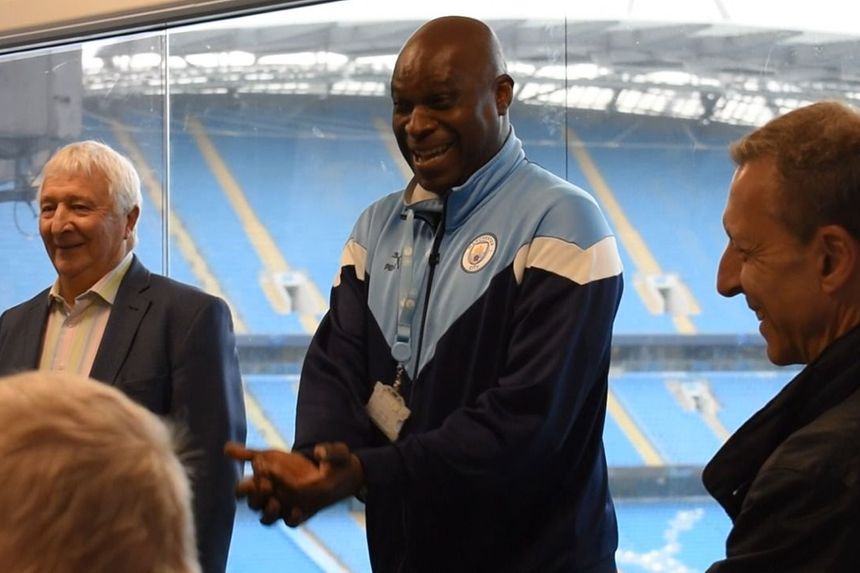 Find out how Man City, Aston Villa, Newcastle and Burnley help people living with the condition

To mark World Alzheimer's Day on 21 September, Premier League clubs have been sharing how they reach out and engage with people living with dementia as well as their carers.

City in the Community have recently launched Reminicity, which aims to engage and support people living within Manchester who suffer from mild to moderate forms of dementia.

"It helps retrieve your memory and helps you remember what you have lost," says one Reminicity participant.

To mark World Alzheimer's Day, former players Mike Summerbee and Alex Williams visited a Reminicity session to talk with participants about their careers as well as memorable Man City matches.

Reminicity involves six weeks of sessions at the Etihad Stadium and campus, where participants can relive classic matches and group discussions on club history, as well as physical activity such as stadium walks and arts and crafts.

The plan is for the participants to create a flag that will be used on the pitch on a matchday.

Former players Tony Daly and Mark Walters dropped in to see how the Villa Foundation are helping to support the local community through its Dementia Activity Cafe.

The weekly programme offers people living with dementia an opportunity to engage in activities that are led by themselves, including music, indoor bowling, boccia, balloon tennis and table tennis.

Should they wish, participants are also able to try out a gentle game of walking football on nearby 3G pitches.

The participants were delighted to meet them and shared memories of watching them play at Villa Park. pic.twitter.com/UJqSGil9rG

Burnley will be promoting the work of the Alzheimer's Society when the charity's logo will be on the front of their shirts for the League Cup tie against Scunthorpe on 21 September.

The shirts will then be raffled off with all proceeds going to the Alzheimer's Society. The club have already announced that £5 of each adult third kit shirt will be donated to the charity.

The Newcastle Foundation's Memory Cafe launched in 2019 and allows people living with dementia the chance to reminisce over favourite famous Magpies sporting moments.

We are proud to be supporting #WorldAlzheimersDay2021. 🖤🤍#NUFC host a Memory Café at St. James' Park to give those who are lonely and isolated a place to catch up and chat with others.

The Memory Café will be back this Thursday (23rd) at 10am.