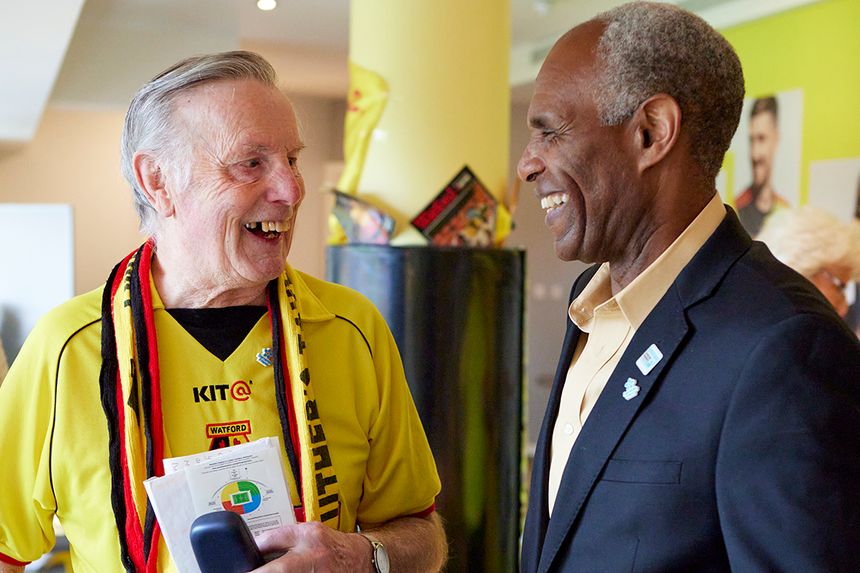 Club are providing joy to people with dementia such as Bryan Hedley, a fan for over 80 years

For 82 years Bryan Hedley has been a proud Watford fan, but now he has dementia, it is the club who are giving him vital support with their Golden Memories programme.

"It's great to be able to talk to people and see people regularly," Bryan says. "And we've got such a nice group here, it's so friendly."

Bryan attended his first Watford match with his uncle in 1939, the day before the start of the Second World War.

Eighty years later the relationship with the Hornets deepened further when the Watford FC Community Sports and Education Trust began the Golden Memories programme for people with mild and moderate dementia in partnership with the Watford Museum.

Golden Memories uses club memorabilia and magic moments to stimulate the senses and evoke personal memories of its fans.

The programme, funded by the Premier League and the Professional Footballers' Association, involves music, dancing, exercises and games as well as visits from former players to give the guests and their carers an opportunity to socialise in a safe and familiar environment.

The weekly sessions have become a highlight of the week for Bryan and his fellow participants.

"I look forward to Tuesdays and I must admit get up early to get organised," he says. "It's just the ideal place to come and meet people that you want to see."

With face-to-face sessions impossible during the pandemic, Golden Memories stayed connected with participants via regular phone calls and visits.

Bryan even enjoyed a socially distanced walk to the park with Rita Taylor, a volunteer on the programme as well as being the widow of Watford's legendary ex-manager Graham.

"Golden Memories is so important to our dad," says Bryan's daughter Nicole. "The group has given him friendships that he may not have had otherwise.

"Dad loves being part of this group and the social opportunities it has given him, including a sense of routine, which is very important when your managing Dementia.

"My sister and I can not thank them enough for the care and attention they have given.

"Our dad doesn't just have a brick in the wall at Watford Football Club but a huge place in his heart and his life, for 82 years."

Golden Memories is part of the work the Premier League and its clubs carry out in local communities to support and engage with people who have dementia.

The Premier League is part of Sport United Against Dementia and is working in partnership with Alzheimer's Society to help create dementia-friendly clubs, while also raising awareness of preventative measures that people can take to support their wellbeing.

Part 2: 'Everton's dementia sessions give us a lot of fun'
Part 3: How clubs support those with dementia