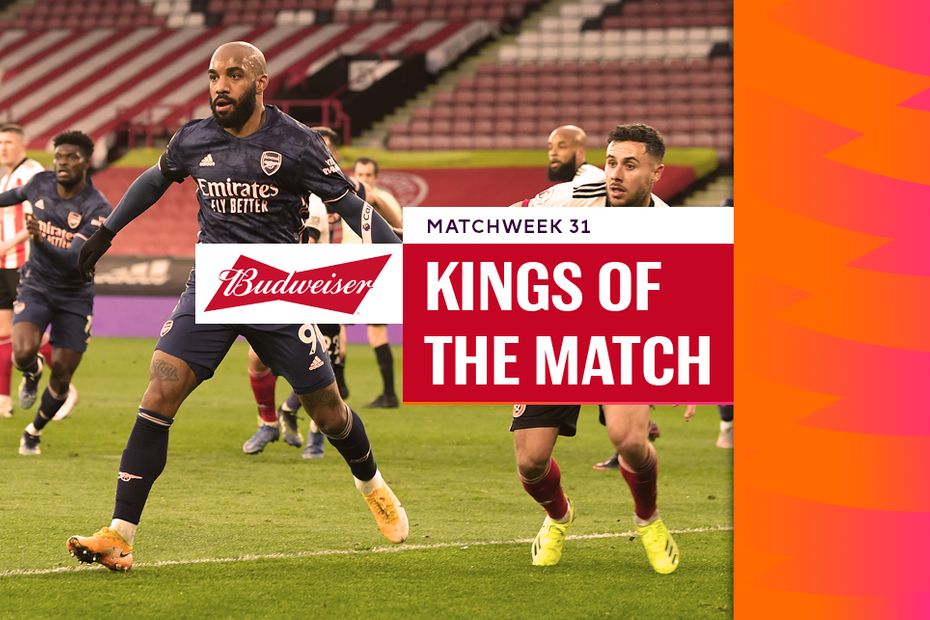 See which players earned the backing of supporters, including Arsenal's Alexandre Lacazette

What we learned in Matchweek 31

Supporters voted in their thousands to crown their Budweiser Kings of the Match in Matchweek 31.

The full-back was a composed figure as Wolverhampton Wanderers recorded a second clean sheet in four matches, and a first ever Premier League win at Fulham.

The Leeds United star scored both of his side's goals, including a dramatic stoppage-time winner to shock leaders Manchester City. He was rewarded with nearly 80 per cent of the vote.

Liverpool's right-back also scored a late winner, firing brilliantly into the bottom corner from the edge of the penalty area to pip his fellow goalscorer Mohamed Salah to the award.

Two goals from the American helped Chelsea to their biggest win under Thomas Tuchel.

The Frenchman came off the bench to score one goal and create another in the space of five minutes, securing a crucial victory in the relegation fight and earning 79.7 per cent of the vote.

Lingard maintained his sensational form with two more goals, taking his tally to eight in nine Premier League appearances as West Ham United returned to the top four. He received 80 per cent of the vote.

After having an earlier goal ruled out for a foul in the build-up, the Uruguayan scored with a brilliant diving header as Manchester United came from behind to win.

A penalty save from James Ward-Prowse ensured a clean sheet as West Bromwich Albion claimed their biggest home win of 2020/21.

The defender took 37.2 per cent of the vote with a commanding display as Brighton & Hove Albion recorded a second clean sheet in three matches.