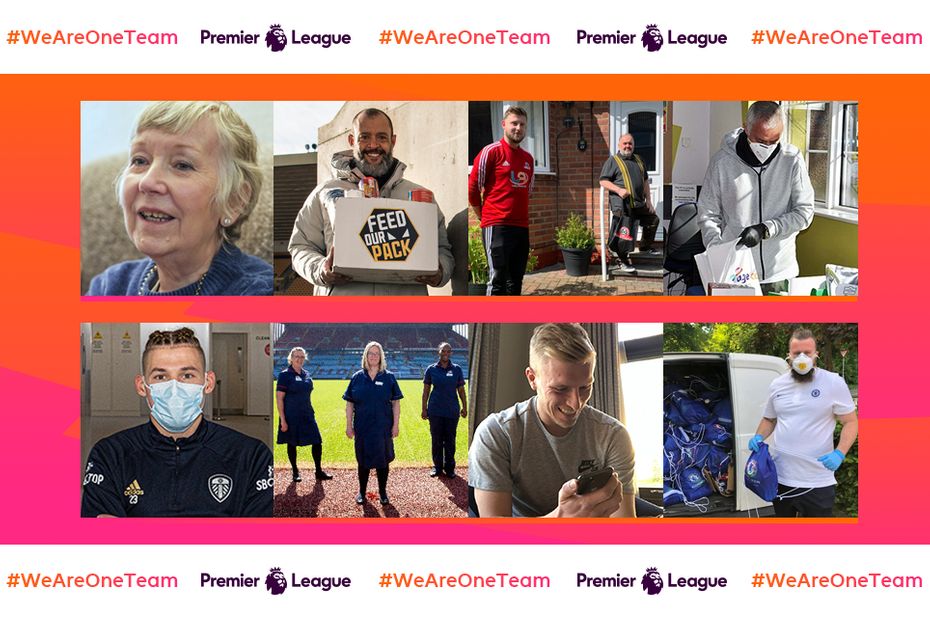 Masters: The past year has been an incredible journey
Coronavirus: Latest on how clubs support community
Clubs offer stadiums to help NHS with pandemic

Over the past 12 months of the coronavirus pandemic, the Premier League and its clubs have stepped up to help those in need in their local communities.

Some of the support has been provided through Premier League funds to the NHS or to EFL club community teams to help them deliver aid throughout England.

In a difficult year, #PL clubs have worked hard in their communities

Below we offer a snapshot of the broad work that our clubs have been doing this past year and continue to offer to those around them who need it most.

The Manchester United Foundation has, like the charitable organisations for the other 19 clubs, been active throughout their local area. In terms of helping to provide for the people of Greater Manchester, the MU Foundation has supplied 145,000 meals over the past 12 months and donated a similar number of items, supporting 93,000 people in total.

14 years later we've continued to engage and inspire young people through one of the most difficult periods in history ❤️ pic.twitter.com/Mr7xqbfMKd

The Chelsea Foundation and the Fulham FC Foundation have both been active in west London, reaching out to thousands of people of all ages.

For example, up to 50 disabled people a week are attending the Chelsea Foundation's pan-disability sessions during the current lockdown, while more than 180 seniors are enjoying one of the organisation's 12 weekly online sessions to ensure they are not isolated.

See: Chelsea continue to inspire and motivate throughout lockdown

During 2020, Fulham's charitable organisation engaged with more than 8,000 people, in person or online following government guidelines, with participants aged from 3 to 102.

Like all the other clubs' charitable arms, Leicester City in the Community has had to make a host of changes to the way it delivers its programmes, whether that is on the pitch, in the classroom or online.

With many households across the country struggling financially, clubs have been playing a crucial role in ensuring families and vulnerable people have food on the table.

Burnley in the Community staff have been diverted from their usual roles to help respond to the unprecedented demand for the club's foodbanks.

One of the many ways Arsenal in Community has responded to the pandemic has been by working with food distribution charity HIS Church and Camden, Islington and Hackney councils to deliver healthy meals.

By December 2020, 500,000 meals had been distributed to the local community, 6,820 miles had been clocked by club staff driving NHS staff to appointments while 250 laptops had been donated to tackle digital poverty in Islington.

💬 "We've been working together for about five years. You can't start a partnership in a crisis, but together we can make an enormous difference."

❤️ Proud to have played our part in delivering over 500,000 meals to our local community with @H15church and @IslingtonBC

In January, the Wolves Foundation launched Feed Our Pack, which is an initial three-year project that aims to reduce the impact of food poverty in the city.

The programme, which started off with a £250,000 donation from head coach Nuno Espirito Santo, will support local foodbanks as well as tackling holiday hunger by providing a programme of food, sport and education to local children during the holidays.

This is what tonight's match is all about. @wwfcfoundation

Every penny from virtual tickets sold goes to the Feed Our Pack initiative, tackling food poverty in the local area.

Premier League stadiums provide the local community with a variety of uses throughout the year aside from the matchday experience and these facilities have been well utilised during the pandemic.

Tottenham Hotspur's state-of-the-art stadium was one of the first to be offered to the National Health Service last year, enabling local hospitals to continue to provide vital care to the local community during the pandemic.

Clubs have also provided their facilities to assist with the UK's coronavirus vaccination programme.

Elland Road, the home of Leeds United, is one of the network of vaccination centres across the city and before it opened last month, midfielder Kalvin Phillips went along to see how the state-of-the-art facilities in the Centenary Pavilion would work.

See: Vaccination Hub at Elland Road opens to the public

Crystal Palace's Selhurst Park is one of London's biggest vaccination venues, with a hospitality lounge in the main stand adapted to deliver the vaccine.

Eagles manager Roy Hodgson also revealed his experience of receiving the vaccine as he encouraged the over-70s to get their jab.

Lockdown has had a significant impact on the mental health of many people, with those who are alone or shielded feeling particularly isolated.

Premier League clubs have used their resources and staff to reach out and make sure people are not shut off, helping to prevent the associated problems that isolation brings.

In the past 10 months, Everton in the Community's Blue Family has made almost 25,000 check-in and welfare calls.

First-team manager Carlo Ancelotti has been heavily involved in the programme and over the months has struck up a strong bond with Everton fan Mark, who has motor neurone disease.

The Albion Foundation, the charitable arm of West Bromwich Albion, has been getting in contact with the club's older supporters to ensure they are not alone.

One fan, Heather Parker, lost her husband to COVID-19 last year and West Brom have been there to support her, delivering a food parcel each week while she speaks regularly with Foundation staff.

More than 100 care packages containing gifts such as quizzes, books, letters from local schoolchildren and T-shirts were delivered by Sheffield United Community Foundation to those affected by cancer to ensure they stay connected.

Senior Saints is the Saints Foundation's long-running initiative to help the wellbeing and maintain the independence of elderly fans.

In this year alone, more than 100 participants have taken part in 53 online sessions, which have included quizzes and exercise classes.

"You have given us purpose." ❤️

Premier League clubs already have strong relationships with their local schools with the help of the PL Primary Stars programme.

And these relationships have been vital to help support schools as they have adapted to deliver in-school and online learning.

The Aston Villa Foundation works across Birmingham to help engage young people and in the current lockdown it delivered 80 live lessons as well as a teacher workshop to assist the delivery of PE.

At the Aston Villa Foundation we offer provision to schools across Birmingham, with tailored programmes to suit your school’s needs.

Manchester City's City in the Community works with 53 primary schools across Manchester every week and since September has delivered more than 1,400 PE lessons.

With the club's soccer schools being called off because of the pandemic, CitC delivered 1,500 free packages to support youngsters from home during the recent half-term.

Did you know that 53 schools take part in our @PLCommunities Primary Stars programme each week?

For many families, a lack of computer equipment made the challenge of home learning even greater.

Brighton & Hove Albion's Albion in the Community, which supports more than 140 schools in Sussex each year, helped to alleviate this need by donating more than 100 laptops to local schools, allowing young people to have access to home-learning resources.

In east London and Essex, the West Ham Foundation has continued to deliver PL Primary Stars and in 2020 worked in 126 schools, engaging nearly 2,000 youngsters.

This year has been a year like no other! Our #PLPrimaryStars delivery has continued throughout the year, both virtually and in person to support pupils in east London and Essex.

To help young people keep engaged and occupied during the holidays, the Newcastle United Foundation helped deliver 10,000 activity packs over the half-term break.

The Foundation also donated laptops to disadvantaged young adults on their employability programme who were struggling to stay connected.