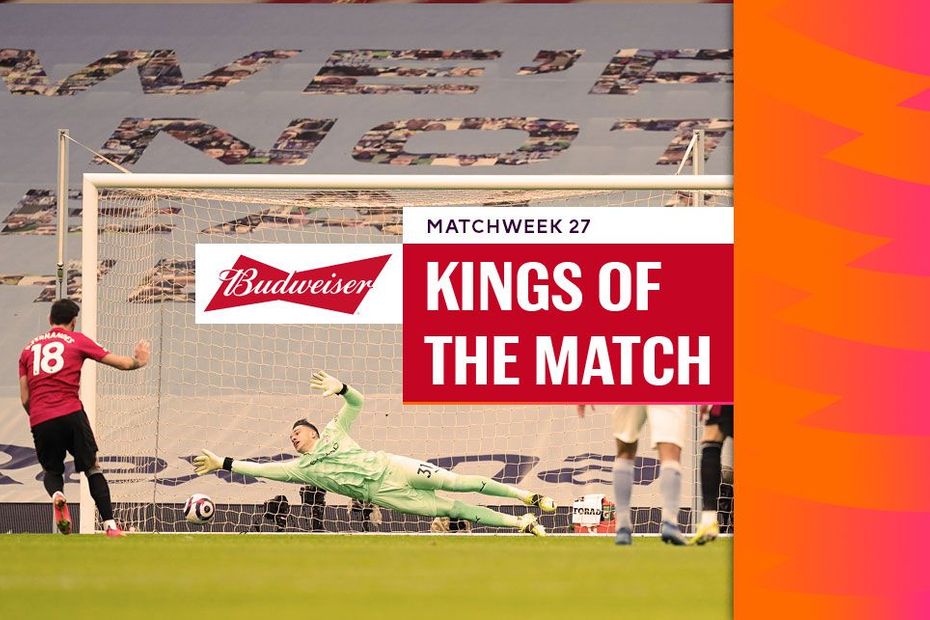 See which players earned the backing of supporters, including Man Utd's Bruno Fernandes

Supporters have voted in their thousands to crown their Budweiser Kings of the Match in Matchweek 27.

The Arsenal striker kept up his impressive Premier League record against Burnley, opening the scoring at Turf Moor with his eighth goal against them.

The Southampton midfielder took over half the vote after capping an impressive display with a first-half penalty.

Aston Villa's goalkeeper kept his 14th clean sheet of the season to earn 73.8 per cent of the vote.

The Leicester City striker scored for a second successive match, helping his side to come from behind and win at Brighton & Hove Albion.

The Gabon international chose the perfect time to score his first goal for Fulham, with his strike earning a notable win at Anfield.

An early penalty from the midfielder set Manchester United on their way to an impressive derby victory which sent them second.

The Tottenham Hotspur striker topped the poll after providing two assists for Gareth Bale and scoring twice himself.

A cool and experienced head at the back as Chelsea recorded a fifth consecutive clean sheet at home under Thomas Tuchel.

Earning 62.4 per cent of the vote, Cresswell crowned a solid display with an assist for Craig Dawson's goal.

The midfielder netted his side's third goal as Manchester City moved to within six wins of securing the title.