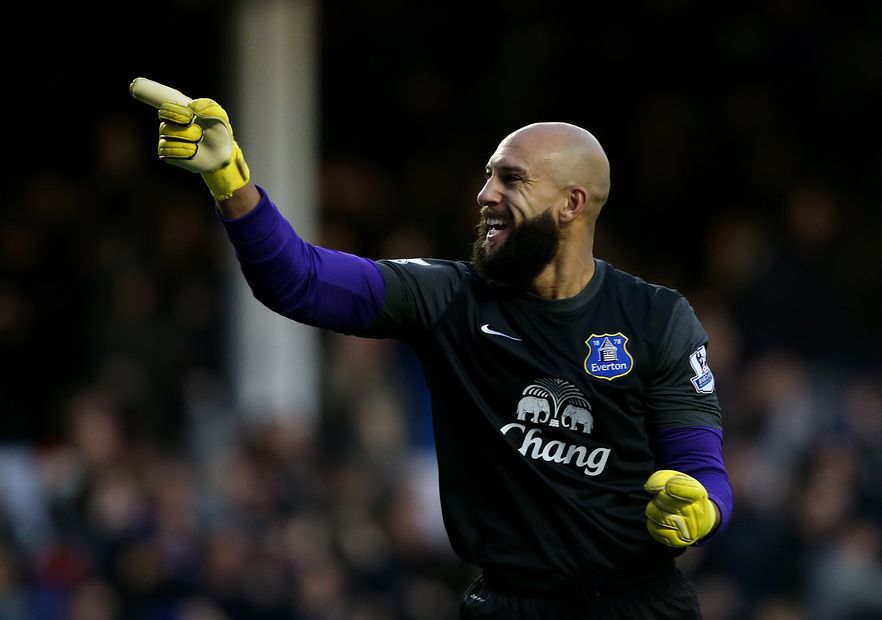 It’s Black History Month in America, and the Premier League is one with a deep history of Black American contributions.

Going back to the early days of the league through today’s squads, Black American players have played important roles.

From legends of the US Men’s National Team like Tim Howard (pictured top) to players who hope to make a similar impact on the global stage, like Zack Steffen and Owen Otasowie, let’s take a look at Black History in the Premier League.

Following a breakout performance in the 1994 World Cup, Cobi Jones joined Coventry City, bringing his skill, flair, and speed to the league when few Americans had made waves internationally.

Although he only spent one season for the Sky Blues, Jones contributed two goals and an incalculable impact by showing what was possible in the game for Americans, and paving the way for the 13 Black American players who came after him.

Following Jones was another USMNT legend who would be a mainstay in the league for well over a decade.

New Jersey-native Tim Howard joined the league in 2003 by way of Man Utd, making what was a monumental move from Major League Soccer to the Premiership.

Although Old Trafford was his first home, Howard became a legend at Goodison Park, where he would go on to make 354 of his 399 Premier League appearances as Everton’s goalkeeper.

During his time with the Toffees, which ended in 2016, Howard became a stalwart for his country and arguably the most decorated American Premier League player of all time.

During Howard’s reign at Man Utd and Everton, nine different Black American players made their debuts in the Premier League.

While their output in the league varies, all contributed massively to the growth of the game in the US and have had illustrious careers around the world.

DaMarcus Beasley made his league debut in a single season for Man City in 2006, scoring four goals for the Cityzens in his 18 appearances, including a game-winner against West Ham.

Known for his silky dribbling as well as his intelligent and versatile play, Beasley’s impact was really felt for the national team, for whom he made 126 appearances, and became the only man to ever play in four World Cups for the Red, White, and Blue.

This period of time also saw the debuts of more USMNT stars, including the likes of Oguchi Onyewu (Newcastle), Eddie Johnson (Fulham), Jermaine Jones (Blackburn), Maurice Edu (Stoke City), and Jozy Altidore (Hull City, Sunderland), who combined for 116 PL appearances and represented the US at various World Cups, while Jemal Johnson (Blackburn) and Johann Smith (Bolton Wanderers) made a handful of appearances in the league as well.

Despite their short stints, this crop of young, big-name talent marked a new era of American influence in the sport and set the stage for an even more dynamic and diverse slate of athletes moving across the Atlantic.

From 2014 until the present day, Black American players have played important parts for a number of clubs in the league while a few budding stars have emerged.

Following an impressive stint with his hometown Seattle Sounders in Major League Soccer and breakout appearances at the 2014 World Cup, Spurs scooped up DeAndre Yedlin in a surprise transfer.

Yedlin made his debut with the Lilywhites, but after a loan spell with Sunderland, the pacy right-back eventually made his lasting mark with Newcastle United, where he racked up 85 appearances, five assists, and two goals, including an equalizer against the then champions Man City.

Yedlin’s time with the Toon backline helped the club re-establish itself in the Premier League again before he eventually moved on to Turkish side Galatasaray this season.

Danny Williams is another American to make important recent contributions. During Huddersfield Town’s last Premier League journey in the 2018/19 season, Williams was a mainstay in the Terriers' midfield, providing cover with 91 recoveries.

While Yedlin and Williams have moved on, the current story of Black Americans in the Premier League is one that promises to make more history.

If the past is any indication, these young players will continue to carry the torch, making important contributions to the league, and growing the game in the United States for generations to come.