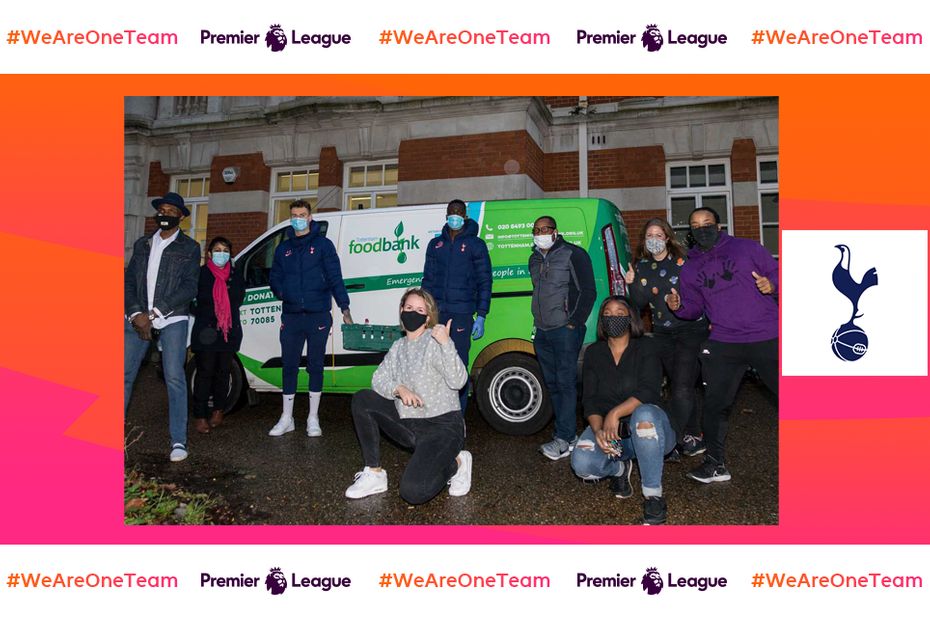 Tottenham Hotspur are continuing to help alleviate food poverty with the launch of a new initiative that offers ongoing support to local foodbanks.

In November, the Tottenham Hotspur Foundation launched Kick Off Against Hunger, a campaign that saw fans raise more than £50,000 by donating the price of a pie, a pint or a programme every time Spurs kicked off a match this winter.

But with the demand on foodbanks within its community increasing by 300 per cent during the pandemic, Spurs have joined forces with its charitable Foundation and official Supporters' Trust, to support them year-round.

Fans are able to make donations of any amount via a text-to-donate service that will be regularly promoted around matchdays.

"Poverty and unemployment in Tottenham has long been above national and London averages and now we have the highest furlough rate of any UK constituency," Tonye Philemon, manager of Tottenham foodbank, told the club's official website.

The Club, @SpursFoundation and @THSTOfficial have today launched a joint fundraising initiative to support @FoodbankEnfield and @TottFoodbank throughout the coming year.

"Spurs' support is like a promotion from the lower divisions into the Premier League, as it helps us give even better support to vulnerable neighbours."

With more than 14 million people in the UK, including 4.5 million children, currently living in crisis, donations made via Spurs' text-to-donate service will help provide emergency supplies to those most in need at North Enfield and Tottenham foodbanks.

"The club has strong ties to its communities and is inspired by the efforts of staff and volunteers at our local foodbanks," added Spurs chairman Daniel Levy.

"We annually make donations at Christmas time – however, we recognise the need for foodbanks to remain stocked with vital supplies for local families throughout the year and not just for Christmas."

Spurs and its Foundation have offered a variety of programmes to support its community during the pandemic including phone calls to the vulnerable, online classes to help with physical and mental wellbeing and offering its Tottenham Hotspur Stadium to host the North Middlesex Hospital’s Women's Outpatient Services.

Premier League clubs have continued to try and help alleviate food poverty throughout the pandemic.

West Ham United doubled its commitment with an additional £100,000 for the Holiday Hunger programme by the end of 2021, while both Crystal Palace and Burnley continue to offer meals via the Palace Kitchen and Burnley Community Kitchen respectively.

The Palace Kitchen has delivered more than 27,000 meals to vulnerable individuals and families, including the elderly, those in emergency housing and the homeless and the Burnley Community Kitchen is working with local schools to ensure no child goes hungry over the half-term, having provided over 200 food parcels to families during the festive period.