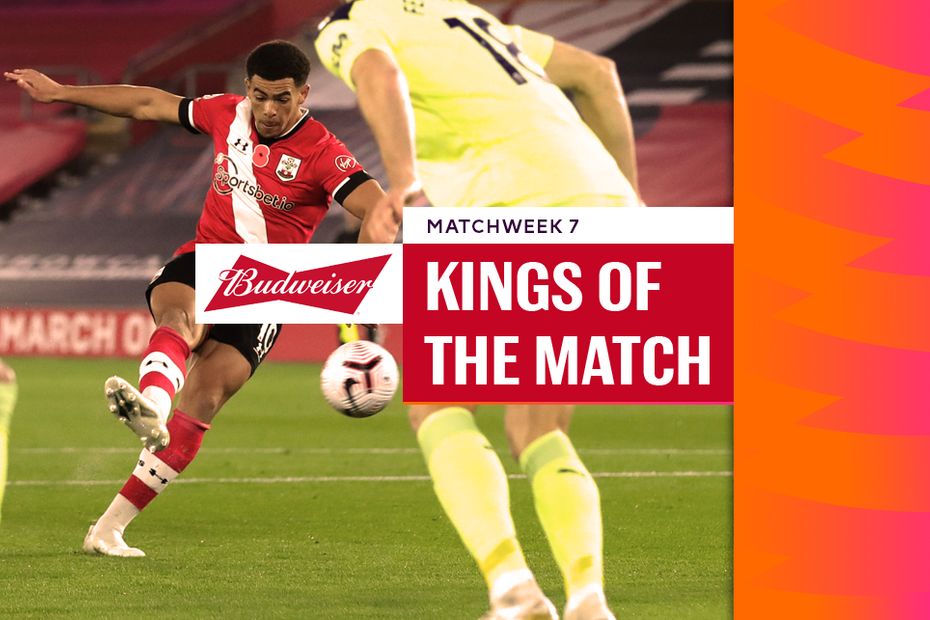 See which players earned the backing of supporters, including Southampton's Che Adams

Supporters voted in their thousands to crown their Budweiser Kings of the Match in Matchweek 8.

Brighton & Hove Albion had 19 shots but could find no way past the goalkeeper, who earned a clean sheet and 36.7 per cent of votes.

The Southampton striker's first-time volley set his team on their way to victory over Newcastle United, earning him 41.8 per cent of votes.

The Portuguese claimed a massive 84.1 per cent of the vote after scoring two goals and setting up the third for Edinson Cavani.

Zaha set up a goal for Jordan Ayew for his second assist of the season. It equalled his haul of seven goal involvements from 2019/20 and earned him 54.1 per cent of votes.

A brilliant performance by the Moroccan was recognised by supporters. He earned 62.1 per cent of votes after creating two of Chelsea's four goals.

The West Ham United defender struck the bar with a brilliant free-kick and kept a clean sheet as he helped his side to a 1-0 win over Fulham, winning 38 per cent of votes.

Kane's 150th Premier League goal, a deft header over Sam Johnstone, earned a victory for Tottenham Hotspur and 82.6 per cent of votes for the striker.

The Leicester City striker scored from the penalty spot to take his goal tally for the season to eight, joint-top in the Golden Boot race. He received 46.2 per cent of votes cast.

The Egyptian's first-half penalty was his eighth goal of the season. It earned Liverpool a draw at Manchester City and Salah the backing of 62.5 per cent of supporters.

Another dominant midfield display from the Aston Villa captain, who earned 57.7 per cent of votes as he got an assist in a 3-0 victory.