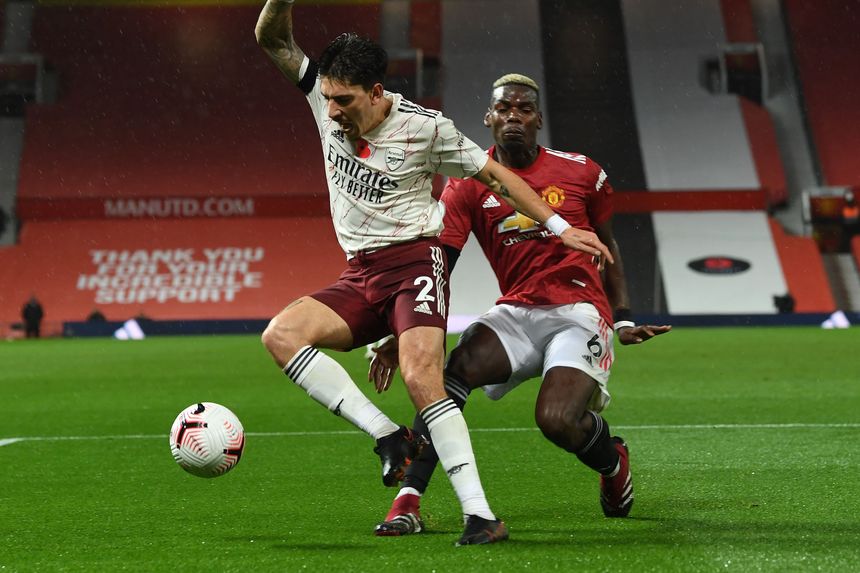 Former Premier League referee Chris Foy explains the processes behind the decisions made by the on-field match officials and Video Assistant Referees (VARs) from Matchweek 7.

This week he focuses primarily on penalties and the importance of the on-field decision.

Incidents: Liverpool's Mohamed Salah, Newcastle United's Callum Wilson and Arsenal's Hector Bellerin (main picture) were all awarded penalties by the referee for fouls committed against them inside the penalty area during their matches against West Ham United, Everton and Manchester United respectively.

On all three occasions the VAR checked each incident and felt that the decisions to award the spot-kicks were not clear and obvious errors, and so the decisions remained.

Foy's view: We have to remember that the VAR is not here to re-referee matches. The on-field decision, generally speaking, carries the weight.

In all three of these incidents, I can completely understand why the referee awarded the penalty for a careless foul. Salah's foot was kicked by Arthur Masuaku, Wilson got ahead of Andre Gomes (pictured below) and was kicked, and Paul Pogba tripped Bellerin.

The VAR will always check penalty decisions, but for me, while subjective, all three of these decisions were correct.

Not awarded on-field - No VAR intervention

Incidents: Crystal Palace's Wilfried Zaha and Brighton & Hove Albion's Leandro Trossard both feel they should have been awarded penalties for fouls against them in their respective encounters with Wolverhampton Wanderers and Tottenham Hotspur.

The VAR checked both incidents and concluded that the decisions not to award a penalty were not clear and obvious errors.

Foy's view: Again this is where the on-field decision is so important. We will always get subjective calls in football, and for borderline decisions, some referees will penalise based on what they see in real-time, while others won't. That said, of course, the aim is always to achieve consistency where possible, something the referees continue to work hard to achieve.

My personal view is that a foul was committed on Zaha by Rayan Ait-Nouri (pictured, below) in the Wolves v Crystal Palace match but the referee didn't and the VAR looked at it and felt that there wasn't enough contact to trip Zaha.

The possible foul on Trossard by Matt Doherty in the Brighton v Spurs match is a bit different. I can understand why Brighton felt it should have been a penalty and, had the referee awarded it, I don't think the VAR would have overturned that decision. But I personally don't feel that the pull back was sustained, so not a penalty, and agree with the VAR not to get involved.

Incident: Leeds United defender Mateusz Klich fouled Leicester City's James Maddison on the edge of the Leeds penalty area. The referee waved play on, but when there was a break in play, the VAR recommended the referee review the incident on the pitchside monitor and a penalty was awarded.

Foy's view: This was good use of VAR. Andre Marriner saw the challenge by Klich on Maddison but didn't consider the contact sufficient to award the penalty.

The VAR, with the benefit of replays, concluded that Klich came through the back of Maddison, he didn't get the ball and that a foul had been committed.

It was deemed a clear and obvious error by the on-field officials, and therefore, Marriner went over to the screen and correctly awarded the penalty.

Incident: Spurs striker Harry Kane was fouled on the edge of the box by Brighton's Adam Lallana (pictured, below). The referee awarded a free-kick as he felt the incident happened just outside the area. The VAR advised that it occurred on the line, and that a penalty should therefore be awarded.

Foy's view: This one seems to have split opinion in terms of who fouls who. Kane saw the ball in the air and backed up, Lallana jumped and his knee clearly caught Kane in the back.

It was no surprise for me to see the referee blow for the free-kick and the VAR checked to see where the foul occurred. Factually, it was on the line, and the VAR advised the referee to change the decision to a penalty.

As this was a factual decision, and the fact that the foul itself was not a clear error, there was no need for the referee to look at the incident again in the RRA.

Incidents: For the first time this season the referee stuck to his original on-field decision after using the RRA. Spurs felt that Pierre-Emile Hojbjerg was fouled by Solly March in the build-up to Brighton's equaliser.

The referee was advised to look at the incident again on the monitor and, having done so, was content with his original call.

Foy's view: Graham Scott was in a good position and he clearly felt that March got the ball. The VAR advised Scott to look at the monitor, and after doing so, he remained with his on-field decision, which is his prerogative.

My view is that it was a foul by March, and therefore the goal should have been disallowed.

In terms of whether the goal occurred in the same phase, whilst this is subjective, the foul resulted in Brighton gaining possession, and the VAR was consistent with other examples this season in considering this as the same phase.