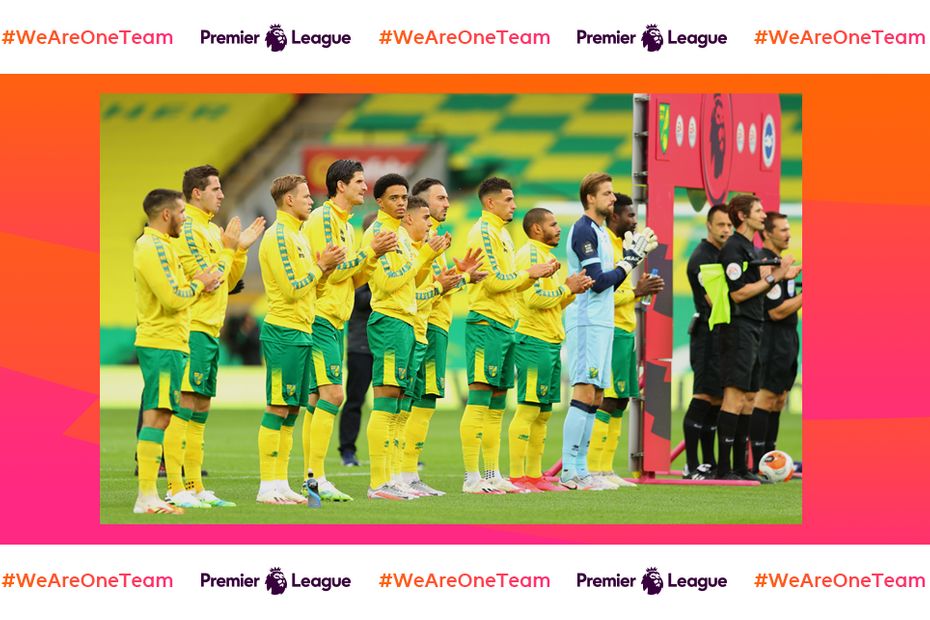 Seventy-two years after the founding of the National Health Service, clubs join call to show gratitude to key workers during COVID-19 pandemic

Sunday 5 July marked the 72nd anniversary of the founding of the National Health Service and the Premier League and its clubs united with sport in the UK to thank NHS staff, key workers and the countless others helping to tackle the coronavirus pandemic.

All the Premier League's weekend matches were preceded by a moment of applause led by players and match officials to show appreciation for the key workers and members of the public who have helped others during the crisis.

Clubs and the Premier League also expressed their gratitude in a variety of ways.

To all those who have supported and cared for others, we say thank you 👏 #WeAreOneTeam #ThankYouTogether pic.twitter.com/522WXde085

Tottenham Hotspur lit up their new stadium in blue in tribute to the NHS.

The stadium joined landmarks such as the Royal Albert Hall, Blackpool Tower, Wembley Stadium, the National Gallery and Balmoral Hotel in paying tribute to NHS staff and all key workers.

Since April, the Tottenham Hotspur stadium has been used to help North Middlesex University Hospital in its fight against COVID-19, including drive-through COVID-19 testing and swabbing in the car park, and housing the hospital's women's outpatient services to redirect pregnant women away from the hospital during the pandemic.

See: 'Spurs have helped us care for our patients'

On today’s #NHSBirthday, we give thanks to everyone, from truck drivers and cleaners to doctors and shelf stackers, all of the key workers who have kept us going in challenging times.

🥳 Today we say happy birthday to the NHS, and thank them for their incredible work throughout the COVID-19 pandemic!

Share your personal thanks at 5pm and say #ThankYouTogether 👏 pic.twitter.com/ksXCxyVxDQ

Manager Ole Gunnar Solskjaer was among the Manchester United stars to leave a message in tribute.

A very happy 72nd birthday to the @NHSuk 💙

Everyone at #MUFC would like to express our gratitude for all your fantastic work. 👏#ThankYouTogether pic.twitter.com/AXsQMazEKb

Today we say happy birthday to the NHS, and alongside the rest of the Premier League thank them for their extraordinary work during the global pandemic. 💙👏 pic.twitter.com/VNJeJfSVXL

A massive thank you to all those, past and present, who have supported and cared for others with incredible bravery and selflessness.

Rivals Crystal Palace and Brighton & Hove Albion were united in their messages of thanks from their respective managers, Roy Hodgson and Graham Potter.

Thank you to all those on the frontline working tirelessly to keep us safe!#CPFC | #ThankYouNHS pic.twitter.com/iJSunbVEEX

💙 The #NHSBirthday is about thanking everyone, from truck drivers and cleaners to doctors and shelf stackers, all of the key workers who have kept us going in challenging times.

👏 l Thank you to each and every incredible frontline worker for keeping us going through these challenging times!

Thank you to all those who have played a part in keeping us safe throughout the COVID-19 pandemic 👏#ThankYouTogether // #afcb 🍒 pic.twitter.com/y3rEN3wimo

Watford were one of the first clubs to open their facilities to the NHS to use and showcased how they had helped the Watford General Hospital next door to their Vicarage Road stadium.

To mark the #NHSBirthday, we say a massive thank you to everyone who has helped, supported others and made a difference in their community during these unprecedented times. 👏#ThankYouTogether #AVFC pic.twitter.com/jvTQxzZr0Z