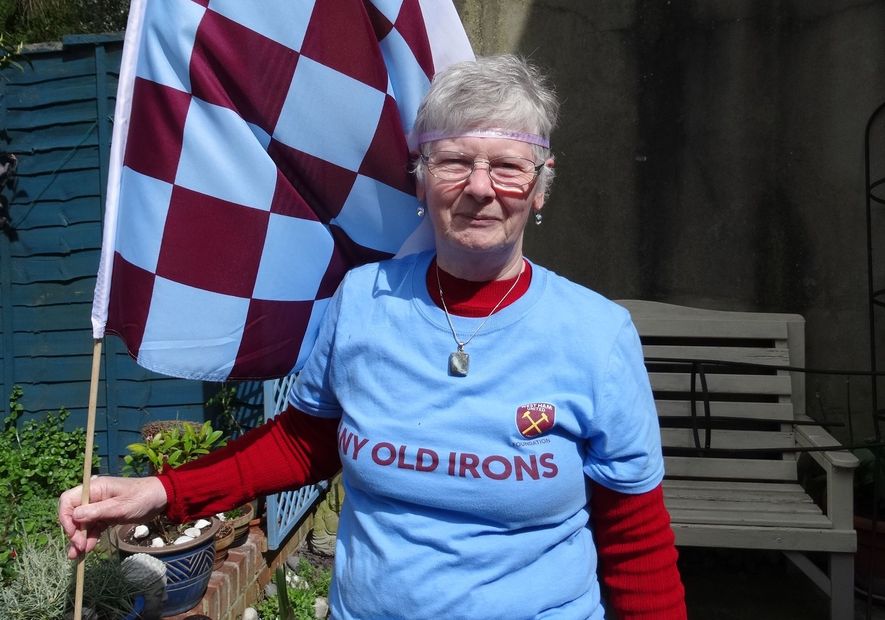 When West Ham United return to Premier League action at home to Wolverhampton Wanderers on Saturday, nothing is going to stop Maureen Hankin from cheering on her team as usual.

Although not able to place her flag or take her normal seat at London Stadium, the Hammers fan has already played a proud part in marking the Premier League's return.

Maureen is a committee member of Any Old Irons, an over-60s group set up by the West Ham United Foundation to help tackle loneliness and isolation.

And she is one of a number of supporters to feature in the League's restart video which encourages fans to enjoy the resumption of the season from the safety of their own home.

Maureen will also be part of the West Ham Fan Wall, which will show supporters cheering on the team on a big screen during the Wolves fixture on Saturday.

"I will put up my West Ham blanket and flag and my house is bedecked in West Ham stuff," says Maureen.

"I'll be watching it on my own but, believe me, I can make an awful lot of noise! I'm desperate to see my team get out there and do us proud."

Maureen has been part of Any Old Irons since 2016 and she is one of more than 300 supporters who have been involved in the programme.

Any Old Irons has played an important role in helping Maureen stay in touch with other fans during the coronavirus pandemic.

She even received a phone call from Hammers legend Phil Parkes as part of the Foundation's ongoing outreach work.

And although she misses the face-to-face interaction, Maureen has stayed connected as the members have been writing letters to each other as they cannot meet up in person.

"The West Ham United Foundation have been absolutely excellent in supporting us as a group," she adds. "They have kept communication open all the way through the pandemic and they check on us the same way we check on our own members.

"We care about each other and we care that we're all staying well and all keeping an eye on each other.”