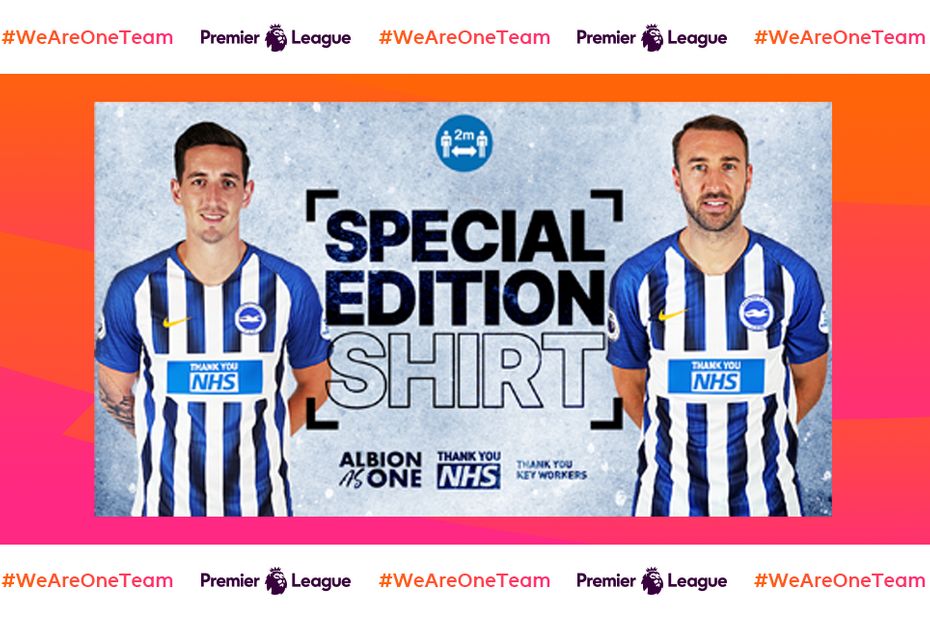 More than £300,000 raised for Albion As One fund External Link

As a way to express their gratitude to the National Health Service staff bravely fighting the impact of COVID-19, Brighton & Hove Albion have released a special-edition shirt for fans to buy and raise funds.

The commemorative shirt has the sponsor logo being replaced with "Thank you NHS", while there is also a "Thank You Key Workers" message on the sleeve.

A limited number have also been sold to fans, with the proceeds sent to NHS charities.

Brighton are also donating a number of these shirts to frontline workers at seven NHS trusts across Sussex.

"We wanted to show our thanks and boost the new charitable fund, Albion As One, and we felt this was the best way to show just how proud we are of the NHS and all key workers," Brighton chief executive Paul Barber told the club's official website.

The shirts have proven hugely popular, with more than 1,600 being bought, helping to contribute nearly £25,000 to the £304,000 raised so far through the Albion As One fund.

Brighton have also converted their Amex Stadium into the south coast's biggest drive-in testing centre and have donated match tickets to NHS staff once football resumes.

🙌 Our #AlbionAsOne fund has now raised over £300,000 for a number of organisations based in Sussex, including charities for hospices, sick children, domestic abuse victims, bereavement care, foodbanks, homeless support and health workers.#BHAFC 🔵⚪️ pic.twitter.com/QuEmrNQCSq

See: How our clubs have been helping the NHS