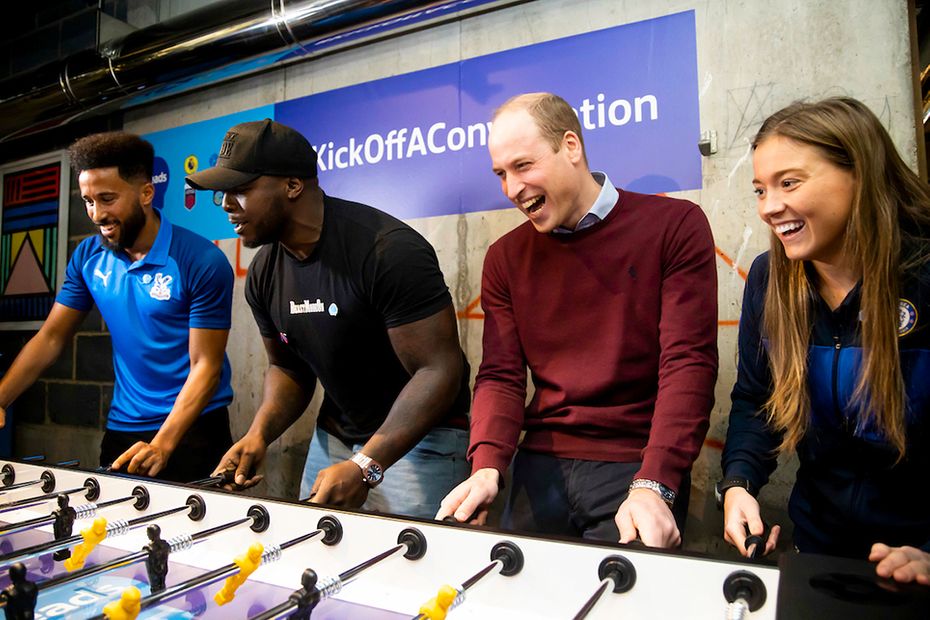 The football family in England is coming together over the next two weekends to kick off a conversation around mental health.

The "Heads Up Weekends" campaign was launched at a table football tournament in London attended by HRH The Duke of Cambridge.

Spearheaded by the Duke, the season-long Heads Up campaign aims to harness the influence and popularity of football to normalise the conversation around mental health, working closely with charity partners Mind, CALM and Sporting Chance.

📽 Behind the scenes at the #HeadsUp Weekends launch.

"Imagine if we talked about mental health as much as we talk about football," the Duke wrote. "Many of us won't go a day without talking about it.

"And whatever team we support, every single fan, player and manager has one thing in common; we all have mental health, in the same way that we all have physical health.

"And we will all face ups and downs in life which will affect it. It's time we start taking our mental fitness as seriously as we do our physical fitness, and that starts with talking."

The weekends' fixtures will highlight the power of talking as a way to support each other.

Clubs of all levels will feature Heads Up branding across stadiums, programmes and player kit, in a major unifying moment that aims to get the nation talking about mental health.

Clubs will also be releasing their own short films featuring players talking about mental health and showcasing the work they do to improve mental health in their communities, such as the AFC Bournemouth feature with goalkeeping duo Aaron Ramsdale and Mark Travers below.

To kick off the Heads Up Weekends, and to mark Time To Talk Day on Thursday 6 February, the Duke of Cambridge joined players, managers, representatives and fans from the men's and women's game to take part in a table football tournament and a mental health conversation in London.

"We are proud to support the Heads Up campaign to raise awareness of the importance of talking about mental health," Premier League Chief Executive Richard Masters said.

"Our clubs are already doing vital work in this area, whether that is within academies or working closely with local communities and schools to support mental wellbeing.

"All our clubs, their staff, managers and players are backing this campaign to help remove stigma and encourage fans to talk openly about their own mental health.

"Football has a major role to play and we hope that by joining the EFL and The FA for these weekends of action we can change the conversation."

The launch accompanied new research by Heads Up that found that football is the No 1 topic of conversation between fans and their friends, with 75 per cent doing so.

But only one in three of the 2,014 fans surveyed regularly talk about mental health with their friends.

The survey found that male fans were much less likely to talk mental health than women.