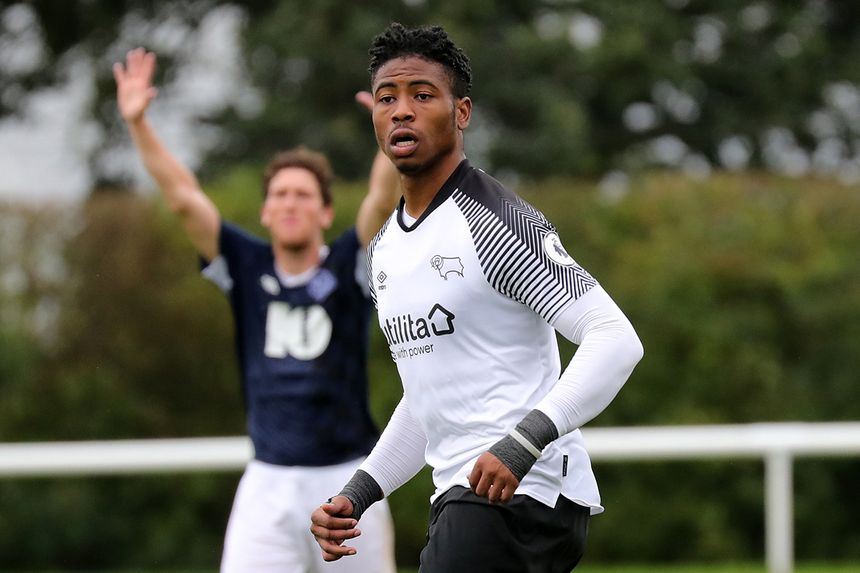 Theo Hudson pulled a goal back for Leeds, who remain bottom without a win.

Derby go a point ahead of Wolverhampton Wanderers, who drew 2-2 with Birmingham City on Thursday.

Nottingham Forest secured their first Premier League Cup win of the season as they beat Southampton 2-1 in Group E.

Virgil Gomis struck in the first half for Forest and Zach Clough doubled the lead after the break, while Kornelius Hansen grabbed a consolation for Saints on 71 minutes.

Forest remain bottom with three points from five matches, a point and a position behind third-placed Southampton.

Middlesbrough fought back from a goal down to earn a 4-1 win over Blackburn Rovers, moving two points behind their visitors at the top of Group G.

Having fallen behind to a ninth-minute penalty from Stefan Mols, Boro hit back through Sam Folarin and Tyrone O'Neill before half-time, with both scoring again after the break.

Elsewhere in the group, a late Mitch George goal earned Burnley their first win in the competition at Crystal Palace in the battle between the bottom two.

Ryan Cassidy struck four minutes into the second half to move Watford off the bottom of Group B and into second place with a 1-0 win over Fulham, who now lie a point behind them in third.

Swansea City were denied a victory that would have taken them off the foot of Group A as leaders Reading scored a late equaliser in a 1-1 draw.

Cameron Evans headed the Swans in front after 16 minutes, only for Oli Pendlebury to level nine minutes from time.

Hull City kept their hopes alive of progressing from Group C with a 3-2 win at Scunthorpe United last Monday, while Exeter City's 2-1 win over Portsmouth sent them above Doncaster Rovers to the top of Group D.

Sunday's Group F match between Liverpool and Sunderland was postponed due to bad weather.