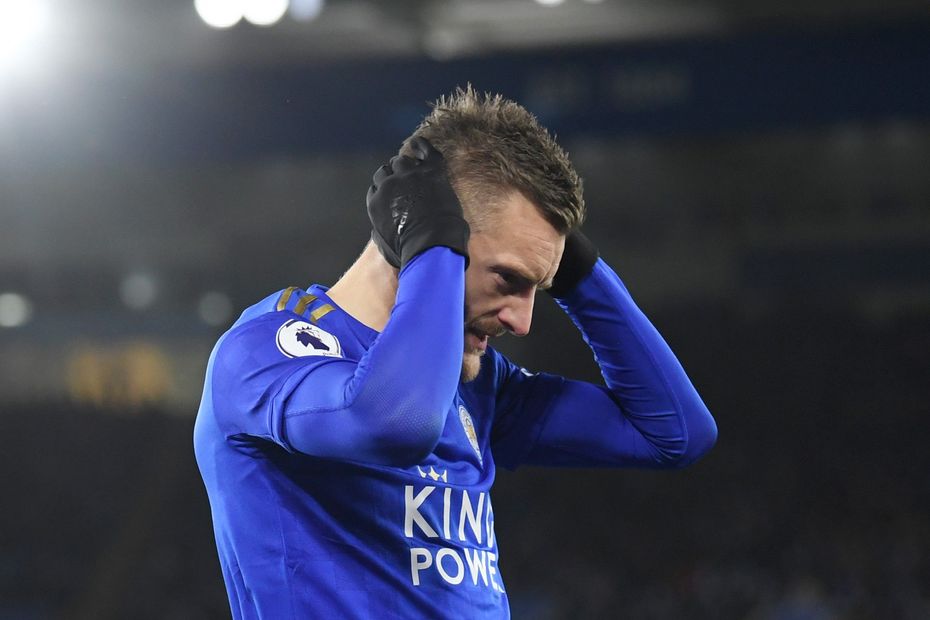 The Scout's panel discuss their plans for the Leicester striker, considering his form, fixtures and Brendan Rodgers' update

Doubts over Vardy come at a time when another two big-hitting strikers, Harry Kane (£10.8m) of Tottenham Hotspur and Manchester United's Marcus Rashford (£9.0m), are both sidelined through injury.

Manchester City's Sergio Aguero (£12.0m) has emerged as the go-to replacement after a return of six goals in the last three Gameweeks.

And Pierre-Emerick Aubameyang (£10.7m) is also rising in popularity. The Arsenal forward will be available for the Gameweek 25 visit to Burnley after completing a three-match suspension.

Foxes manager Brendan Rodgers has played down fears of a lengthy injury for Vardy, telling the club website "it didn't look too serious."

But Vardy's injury comes during a dip in form. He has scored just one goal and supplied two assists in his last six Gameweek appearances, totalling 22 points.

Meanwhile, Leicester face three of the Premier League's top seven sides in their next three Gameweeks, taking on Wolverhampton Wanderers and Man City following their contest with Chelsea.

Patience could pay off

Crucially for his 45.4 per ownership, there will be an update on Vardy's situation before Gameweek 25.

Prior to the Chelsea match, Leicester face Brentford in the FA Cup this Saturday and then visit Aston Villa in the EFL Cup three days later.

Should Vardy be passed fit for at least one of those matches, many will look to hold onto FPL's top-scoring forward.

However, if he is ruled out, Vardy's schedule could persuade even more owners to look for a replacement.

Holly Shand (@FFCommunity_): Aguero and Aubameyang are in the frame as Vardy replacements. I'm tempted to activate an early second Wildcard.

Sam Bonfield (@FPLFamily): I have a lot of value in Vardy these days so I'll be waiting to see how long his injury will keep him out for. If I need to lose him then I'll probably look to either move for Aubameyang now he is available, ahead of a nice run of fixtures for Arsenal, or I'll downgrade to Jordan Ayew (£5.0m) at Crystal Palace or one of the Sheffield United forwards. Their fixtures all look great for the foreseeable future too.

Ash (@FPL Hints): I probably held on to Vardy a few Gameweeks too long. His injury gives me a reason to finally sell him. I'm looking at the merit of buying Jimenez instead, with the extra funds being used to boost my midfield.

Neal Thurman (@nealjthurman): With the news that Vardy's injury doesn't seem serious and some extra time between matches, I'm holding for now.

Ben Crabtree (@FC_CrabDogg): Trying to get Aguero seems the best option. As I already own him I'll look at getting Calvert-Lewin and upgrading Todd Cantwell (£5.0m) for more depth, despite the benching dilemma this will cause each week.

Lee Bonfield (@FPLFamily): Whoa! Hold your horses FPL managers! The post-match assessment from Rodgers was that Vardy had injured his glute muscle, rather than his hamstring. For FPL owners, that should mean a few days' recovery, rather than weeks. With an FA Cup tie first up at Brentford, Rodgers could easily rest him with a view to starting Vardy in Gameweek 25 against Chelsea. I'm holding.

Ben McNair (@drbenmcnair): I'm hoping Vardy pulls through because it's not obvious to me how best to respond. Raul Jimenez (£7.5m) is a player I want, but Wolverhampton Wanderers' next couple of fixtures are tough. There are some good budget options in Chris Wood (£6.2m) and Dominic Calvert-Lewin (£6.0m) that might allow you to bring in Mohamed Salah (£12.4m), Sadio Mane (£12.4m) or Kevin De Bruyne (£10.6m) if you don't have all three already.

Part 1: FPL experts: What to do with Man City assets?