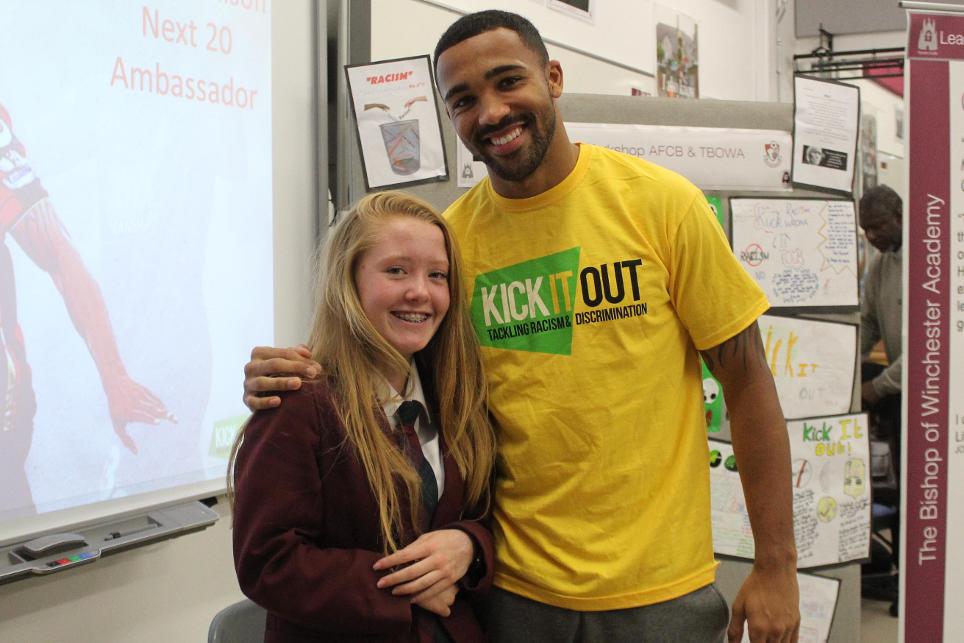 Students at Bishop of Winchester Academy in Winchester welcomed a special guest recently when Callum Wilson joined in with one of their lessons.

The AFC Bournemouth striker attended a workshop run by Kick It Out to talk about equality and inclusion with the young people as well as his experiences within football.

He was also responsible for picking the winning entry in a poster competition the students took part in to promote an exclusive environment in football, with the winner receiving tickets for the forthcoming Premier League match against Leicester City.

"If I can do my bit to help achieve fairness in the game then I am more than happy to do so," Wilson told afcb.co.uk.

Wilson is one of Kick It Out's 'Next 20' ambassadors, a group of players across the Premier League, English Football League and Women's Super League who help spread key messages of equality and inclusion together with former Charlton Athletic and Crystal Palace winger Paul Mortimer, Kick It Out's professional players' engagement manager.

Another ambassador is Arsenal's Carl Jenkinson, and he also went back to school to be a part of an anti-discrimination workshop at Copenhagen Primary School in Islington.

"Our ambassadors have to engage and debate on some difficult subjects, but by doing this they will ensure that future generations understand more about how equality and inclusion can affect us all," Mortimer told arsenal.com.

And in Hull, Curtis Davies and Jake Livermore spoke with youngsters from a number of local schools at a Show Racism The Red Card event hosted by the Tigers Trust, the community arm of Hull City.

The event explored subjects such as stereotypes, evaluated language and terminology and prejudice, with the Hull City pair fielding questions about their experiences of racism.

"Football has come a long way in recent years with regards to this issue," Davies told hullcitytigers.com. "The Premier League, and the amount of players who come over to this country to play in it, has helped to widen people's eyes."