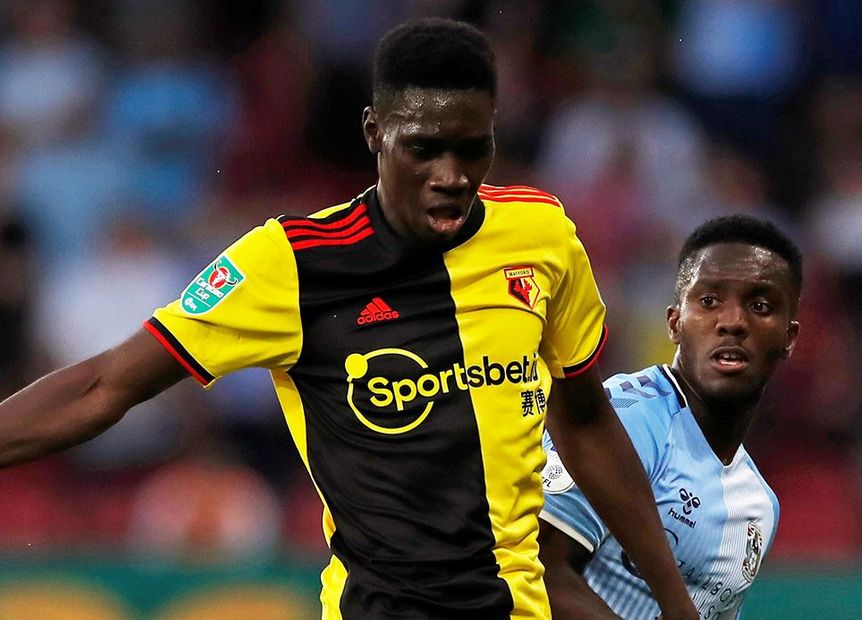 Adrian Clarke is looking at key tactical talking points ahead of Matchweek 5.

Watford's club-record signing Ismaila Sarr featured for only 16 minutes of Premier League action under Javi Gracia, but new head coach Quique Sanchez Flores can give the Hornets a fighting chance against Arsenal on Sunday by giving the winger more game time.

The Gunners are well aware of the 21-year-old's threat, having been on the receiving end of it last season.

Sarr was a constant thorn in Arsenal's side when Rennes gave Unai Emery's side a scare in the UEFA Europa League round of 16.

Storming down the right wing, the Senegal international had Sead Kolasinac and Nacho Monreal on the back foot as the French club ran out 3-1 first-leg winners.

Over the course of two impressive displays against Arsenal, he scored once and attempted another seven shots.

His speed and strength will be a concern for Kolasinac on Sunday, especially if the Bosnian is isolated in 1v1 situations.

When Pierre-Emerick Aubameyang starts on the left of Arsenal's attack, Kolasinac can sometimes be found short of support down that flank.

So if Sarr starts, he may well be a key man for Watford.

Sarr scored for Watford on his full debut in a 3-0 EFL Cup second-round home win over Coventry City.

That evening the Hornets started in an orthodox 4-4-2 system that morphed into a 4-4-1-1 out of possession.

This is the kind of formation that best suits Sarr.

But it is a shape that Gracia was reluctant to use in the Premier League.

The Spaniard opted for a narrow 4-2-2-2 system in 35 out of 38 contests last season and this term he used three formations without trying 4-4-2.

It would be wrong to accuse Watford of lacking a positive approach. Their total of 55 shots is the seventh-highest in the league this season but they have scored only twice.

If Sanchez Flores is to coax more clear-cut opportunities out of his team, Watford must stretch teams more often, providing ammunition from further up the pitch.

It may be wise to place more emphasis on width.

Unlike his predecessor, Sanchez Flores is not so averse to 4-4-2. It is a formation he favoured in over 76 per cent of his matches during his first spell at Watford.

He also adopted this shape most frequently at the club he joined after leaving Vicarage Road in 2016, setting Espanyol up in a 4-4-2 system in 70 per cent of their LaLiga matches.

With Sarr a pacy out-and-out wide man, and others such as Gerard Deulofeu, Isaac Success and Danny Welbeck capable of providing dynamism, Sanchez Flores certainly has the players to get in behind defences.

In the absence of injured captain Troy Deeney, greater responsibility has fallen on the shoulders of Andre Gray.

He scored in a 3-1 home defeat by West Ham United but is not as comfortable as Deeney at leading the line on his own, which is the role he has been given in the last two matches.

Roberto Pereyra can be pushed up to support him, with Deulofeu and Success alternatives.

Sanchez Flores may, however, opt for Welbeck, who will be eager to get his first league start in Watford colours.

The former Arsenal forward has the speed to trouble David Luiz and Sokratis and will be hungry to impress his new head coach.

He will also, no doubt, be keen to make a point to his old employer, who deemed him surplus to requirements at Emirates Stadium in the summer.

Welbeck is a better finisher than he is often given credit for, dipping under a 20 per cent chance-conversion rate in only one of the last four seasons.

A fresh partnership of Welbeck and Gray up front, with Sarr flying down the right wing, would be a bold call by Sanchez Flores. However, the injection of pace in these areas could give Arsenal's unsettled back line an uncomfortable afternoon.

Much has been made of Arsenal's front three of Aubameyang, Alexandre Lacazette and Nicolas Pepe. But if Watford's returning head coach is brave, it could be his own rapid attackers who win the day.