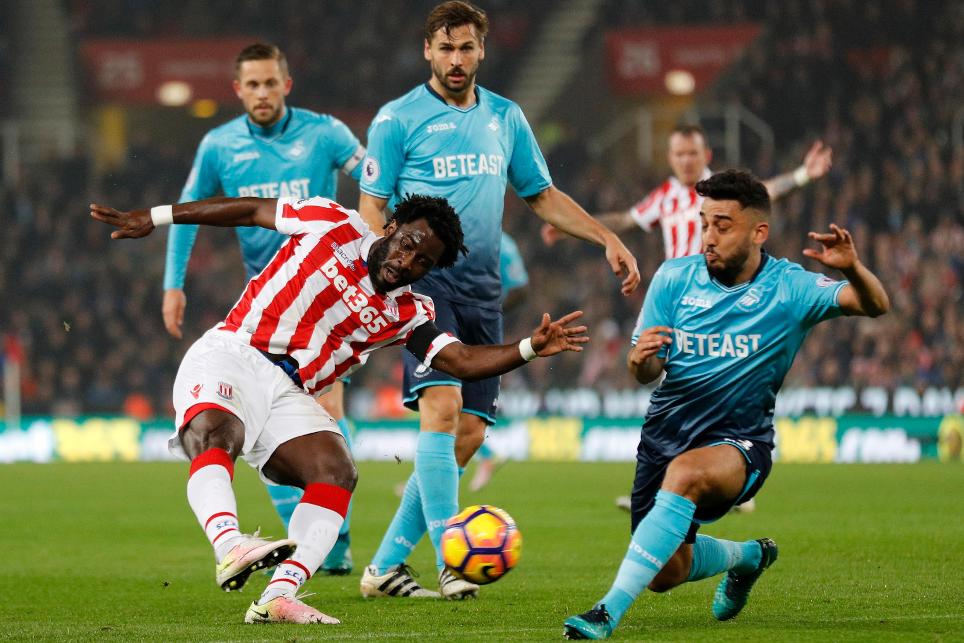 Bony up and running External Link

Having guided Stoke City to a third successive win against Swansea City on Monday night, a resurgent Wilfried Bony (£7.3m) has the opportunity to plunder further Fantasy Premier League returns at West Ham United in Gameweek 11.

Bony has taken time to settle as the Potters' lone forward but, with Mark Hughes' men flowing with confidence, Bony can establish himself as their pivotal figure as well as a potential asset for FPL managers.

Handed his Stoke debut in September, Bony embarked on a six-match goalless run before finding the net in Gameweek 10.

The two goals against his former club, Swansea City, produced a 13-point return for his 1.1% FPL owners, serving a reminder of the talents that harvested 17 goals for the Welsh club in 2013/14.

When compared with his displays for Manchester City last season, Bony is seeing more of the ball in the opposition box, averaging 4.9 touches compared with 3.4.

His attempts on goal (up from 2.3 to 2.6) and shots inside the penalty area (from 1.8 to 1.7) are almost identical to that final season at the Etihad.

But Bony has almost doubled the number of chances created per matches (from 0.5 to 0.9), with his average ICT Index per match also improving from 4.8 to 6.0 at present.

Over Stoke's three-match winning run, Bony has fired 11 attempts on goal, with eight arriving inside the penalty area. On both counts, only three other forwards boast superior numbers in that spell.

Bony on the up

His team-mate, Joe Allen (£5.2m), has managed six shots in the penalty area by comparison over that period.

Owned by 13% of FPL managers, Allen has acquired over 91,000 transfers ahead of Gameweek 11 on the back of a third double-figure points haul in five appearances, yet just 6,000+ of managers have been tempted to snap up Bony.

With Marko Arnautovic (£7.2m) suspended at West Ham and Xherdan Shaqiri (£6.4m) doubtful due to injury, Hughes will be more reliant than ever on Bony and Allen for Saturday's encounter.

Slaven Bilic’s side will be without centre-half Winston Reid (£5.0m) as they attempt to improve a record where they have conceded 19 goals this season.

With home encounters against AFC Bournemouth and Burnley either side of a Gameweek 13 trip to Watford after the international break, Bony has the platform and the confidence to play his way into FPL plans.