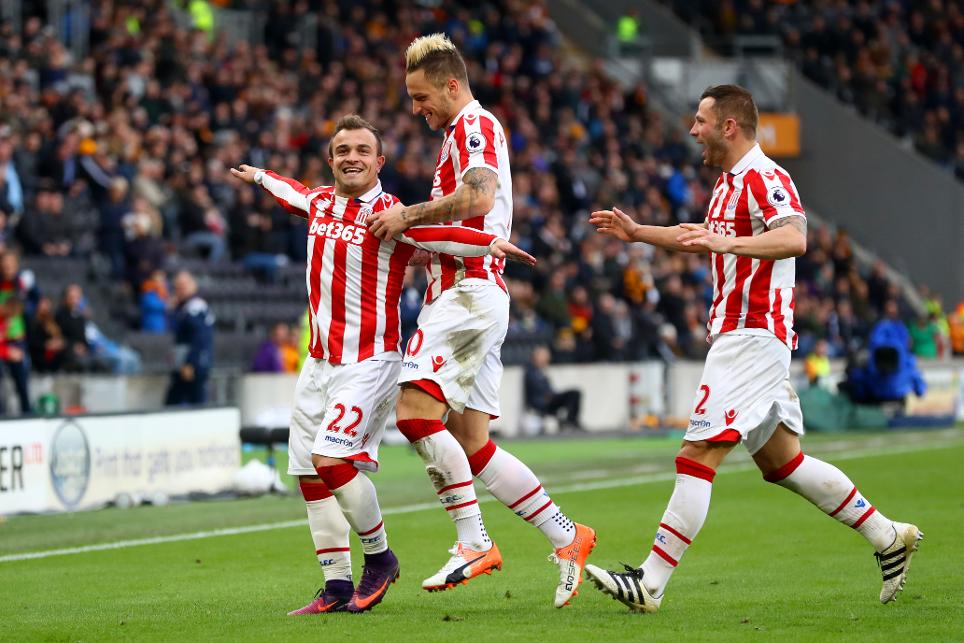 Shaqiri's two long-range efforts in the 2-0 win over Hull City earned the midfielder 15 points as the top scorer of Gameweek 9.

He is joined in the best XI by Shawcross, whose assist for Shaqiri’s opener helped Stoke on their way to a second successive victory and clean sheet.

The duo’s output highlights the potential on offer from Mark Hughes’ side, along with the popular Joe Allen (£5.1m).

Back in Gameweek 8 Allen was transferred in by more than 250,000 new owners after scoring four times in three appearances.

The rest of the Dream Team line-up is also made up of debutants.

Middlesbrough's Victor Valdes (£4.5m) takes his place between the posts.

The Spaniard repelled Arsenal’s attacking waves with five saves at Emirates Stadium, earning a second clean sheet of the campaign to return 10 points.

The inclusion of Simon Francis (£4.5m) means that all of AFC Bournemouth’s regular back four have appeared in the Dream Team this season.

The Cherries captain helped to defy Tottenham Hotspur in a goalless draw at Vitality Stadium to collect a clean sheet and maximum bonus points.

Eddie Howe’s men have now conceded only once in their last four matches at home.

Grabbing the late winner in a 1-0 home victory over Sunderland, Reid has now produced 29 points in the last three rounds of fixtures, courtesy of a goal, an assist and two clean sheets.

Cahill found the net in a 4-0 home triumph over Manchester United as Antonio Conte’s men collected a third successive shutout since moving to a 3-4-3 set-up.

His team-mate Pedro (£7.1m) supplied a goal and an assist against the Red Devils; the Spaniard has returned 19 points over two appearances on the right flank.

Elsewhere in midfield, we find Crystal Palace's Yohan Cabaye (£5.6m), who benefitted from a change of position in Saturday's defeat at Leicester City.

Shifted to a No 10 role due to the absence of Jason Puncheon (£5.5m), the Frenchman fired a Gameweek-high eight goal attempts, eventually grabbing the Eagles' late consolation in his side's 3-1 loss.

Scott Arfield (£5.2m) returned to the Burnley starting XI after Steven Defour (£6.0m) was ruled out with a hamstring problem. The Scot delivered a goal, an assist and maximum bonus points for a 12-point haul in a 2-1 win over Everton at Turf Moor.

Sadio Mane (£9.0m) produced a goal and an assist at home to West Bromwich Albion and has now scored in three of Liverpool’s last four home fixtures.

For the second successive Gameweek, the Dream Team turns to a 4-5-1 formation, with a lone striker leading the attack.

Emerging from the bench to grab an equaliser at home to Southampton, the 20-year-old has served up three goals and two assists in his last five Premier League appearances.