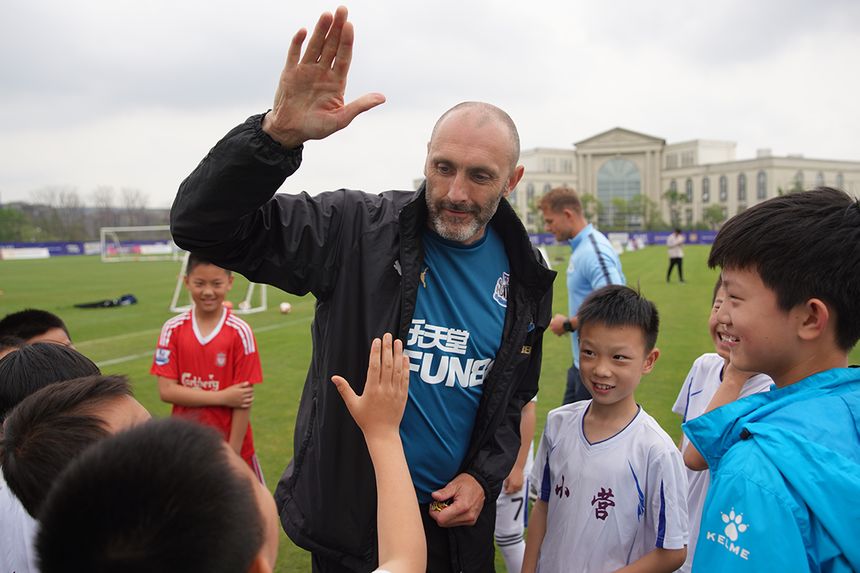 Ahead of their teams coming to China in July to compete in the Premier League Asia Trophy, academy coaches from Manchester City, Newcastle United, West Ham United and Wolverhampton Wanderers have been helping the development of local talent in the country.

The four coaches were at the Jiangsu Suning Academy in Nanjing as part of a two-day course, in which they passed on on their knowledge to their counterparts from all 16 Chinese Super League clubs.

They offered insight to the Chinese coaches into areas such as curriculum, physical development and training schedules.

"We have had an opportunity to share what we've learned through our own experiences," said James McPike, lead youth development coach at Wolves.

"This training is challenging them as coaches. It is checking what they're doing, seeing if they can learn anything from us and implement it into their structure and programme to help produce better players."

Shanghai Shenhua coach Tao Jin was struck from the seminar by the different ways players trained in the Premier League compared with the CSL.

"We train more frequently than Premier League players, up to five times a week, but this isn’t reflected in the quality of players produced," he said.

"It is good to learn more from Premier League coaches and improve the quality of our training, rather than the quantity."

The event is the latest collaboration in a full programme of football development initiatives ahead of the Asia Trophy in July, as part of the Premier League and British Council’s Premier Skills programme.

These will also include a youth tournament and referee training.

McPike and his fellow coaches Jamie Carr (Man City), Tony Threlfall (Newcastle) and Lauris Coggin (West Ham) travelled to Shanghai this weekend, the location of the second round of Asia Trophy matches.

There they delivered another two-day event, but this time to 30 local PE teachers as they look to help develop football closer to the grass roots.

As well as helping the Chinese coaches, the courses are providing an education to the Premier League coaches.

"This is a fantastic opportunity," said McPike, "Not just from a football point of view, but from experiencing a different culture, a different lifestyle. It's a great privilege."

And Threlfall, pictured top, is also finding the feedback from the Chinese coaches worthwhile.

"It's really exciting to be in Nanjing and working with the coaches from the Chinese Super League," he said.

"The main thing we've seen this week is the sharing of ideas and best practice from the Premier League clubs, and with the Chinese Super League clubs.

"They're very interested, they ask some good questions. They challenge my ideas and that's always a good thing."