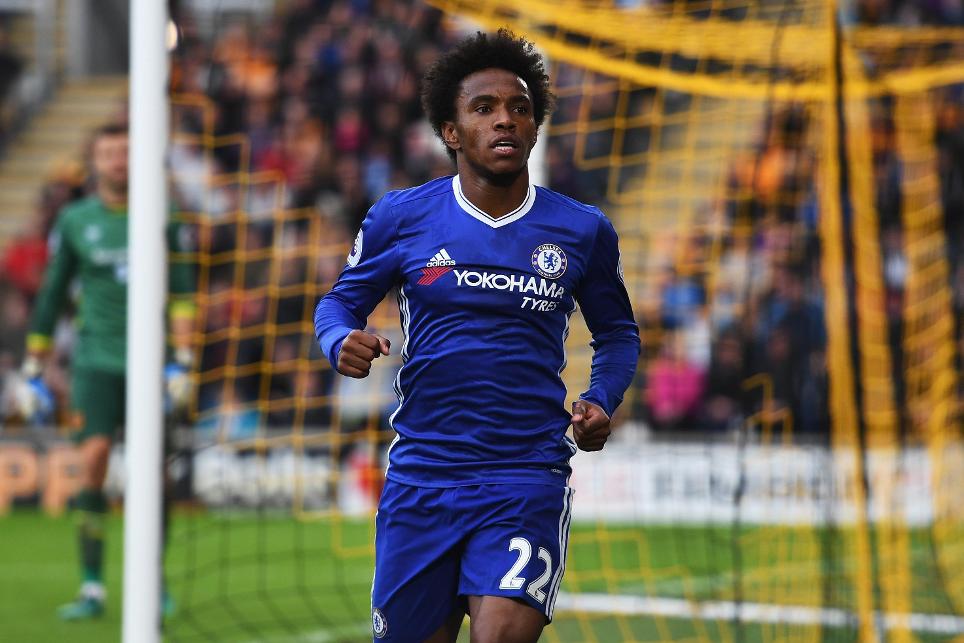 Chelsea midfielder adds to stunning strike from GW7 on international duty, while there is good news for Sergio Aguero owners

Willian (£7.3m) was among the Fantasy Premier League players to shine during Tuesday's international action, while managers can breathe a sigh of relief after Sergio Aguero (£13.1m) recovered from injury to play the full 90 minutes for Argentina.

Sitting in 43.3% of squads, Aguero had been a doubt after picking up a calf problem in training.

The Manchester City striker – whose average of 7.8 points per match is higher than any forward in 2016/17 - now looks set to lead the line at home to Everton on Saturday.

Aguero's confidence could be in question, however; he missed a second-half penalty and two further gilt-edged opportunities as Argentina suffered a 1-0 defeat to Paraguay.

The Blues winger found the net as Brazil won 2-0 against Venezuela in the early hours of Wednesday morning.

Willian also scored away to Hull City in Gameweek 7 and is ranked second for chances created (23) this season.

He looks in fine form ahead of a home encounter against a Leicester City side who have conceded 10 times on their travels – more than any other Premier League side.

Liverpool’s Philippe Coutinho (£8.3m) played all but seven minutes of the victory over Venezuela, though his Anfield team-mate Roberto Firmino (£8.4m) was an unused substitute as the Reds prepare to host Manchester United on Monday.

Despite long-haul flights, both look set to start with Jurgen Klopp's options in midfield reduced by injuries.

The Liverpool manager still has concerns over Georginio Wijnaldum (£7.7m) and Adam Lallana (£7.2m), meaning that Coutinho, who is owned by 34% of FPL managers, could be forced into a deeper role against Jose Mourinho's men.

Sanchez was utilised as a substitute in the Premier League match that took place directly after the previous international break, at home to Southampton in Gameweek 4.

Nonetheless, given that the Gunners struggled to break down the Saints, he has a good chance of a start as Swansea City travel to Emirates Stadium for Gameweek 8.

Owned by more than 7% of FPL managers, Diomande – who also supplied an assist – has produced one goal from seven starts on the left flank for the Tigers.

He has a favourable run of fixtures, starting with matches against AFC Bournemouth, Stoke City and Watford in the next three Gameweeks.

Having emerged from the bench to score in a 2-2 draw with Watford in Gameweek 7, King has now netted in two of his last four league outings.

He faces Middlesbrough, Sunderland and Stoke City in three of the four fixtures following the weekend trip to the KCOM Stadium.