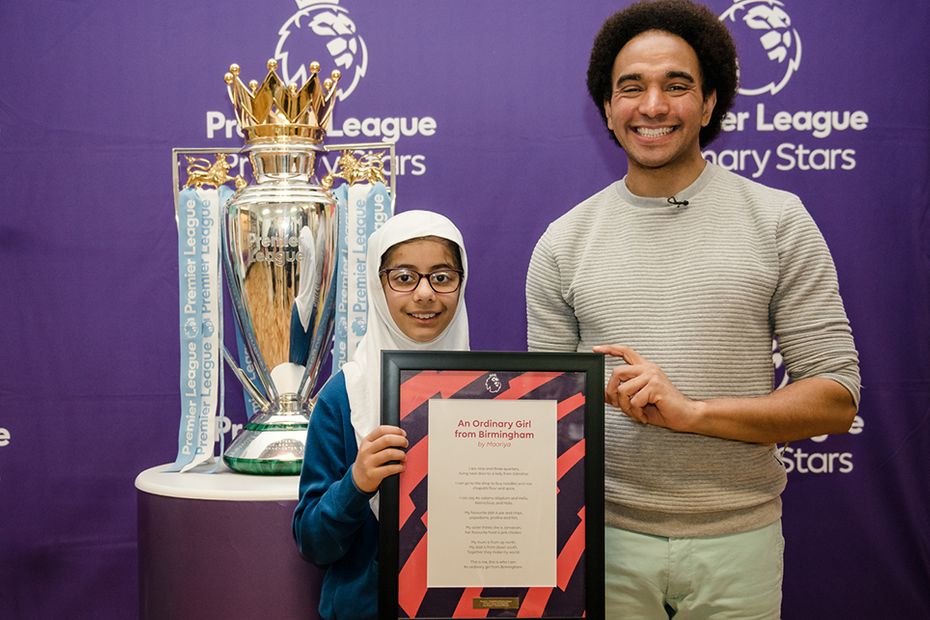 One of the winning poems from the 25,000 submitted for the Premier League Writing Stars competition was successful because it captured the essence of diversity that was the feature of this year's edition.

Maariya, 9, was the Key Stage 2 winner with her poem "An Ordinary Girl from Birmingham". It encapsulated what is an everyday core topic at her school, Heathfield Primary, in Birmingham.

"We are a very diverse school. It's part of our conversations day in day out," said Sam Richard, Heathfield's deputy head.

"We have got a phrase that we use, which is, 'We all smile the same language'.

"Our children know that, we are all one, it was really a good chance to talk about it as a whole class and to discuss how diversity to one person might mean something completely different to another."

But Maariya's poem was also picked as one of only two national winners by the judging panel of Waterstones Children's Laureate Lauren Child, former Premier League footballer Rio Ferdinand, singer-songwriter Olly Murs and poet Joseph Coelho, because it was based on Maariya's own experiences and so carried a "beautiful sentiment" that grabbed the interest of the judges.

"Maariya's poem is wonderful," Coelho said. "It has a really strong voice.

"It talks about her parents being from the North or South and how that doesn't matter because together they make her world, which is such a beautiful sentiment."

Coelho presented a stunned Maariya with her winning certificate at a special assembly at her school featuring the Premier League Trophy.

"I couldn't believe it, I felt like it was a dream because I thought mine really wasn't the best out of all of them," Maariya said.

The Key Stage 1 prize went to Nabila, Lary, Jacob, Amy, Benjamin, Thomas and Khadija, pupils from St Finbar's Catholic Primary School in Liverpool who teamed up to write "Being Different".

"I couldn't be prouder; I'm the proudest teacher in the world right now," said Jennifer Connor, the school's England and Key Stage 1 lead.

"The impact of having the Premier League involved has made a huge difference in particular to our boy writers who may not have always been engaged in the past and have given this competition 100 per cent."

Coelho said the poem stood out to the judges because of its "wonderful message".

"You have these regular rhyming couplets and a wonderful message which seems to refer to the poets’ own experiences of possibly struggling with but then celebrating diversity," he said.