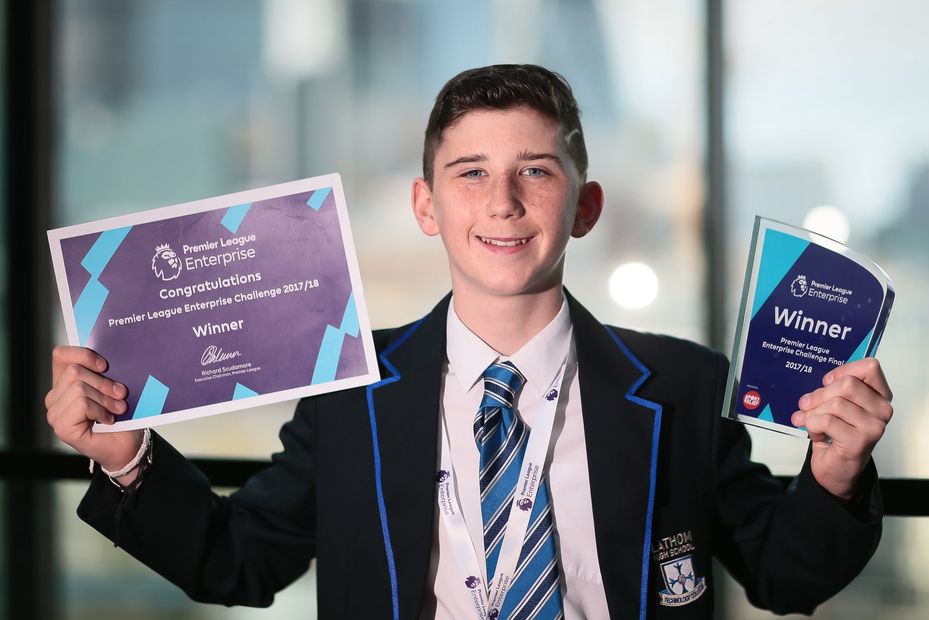 In 2016, Dan Stephens needed two operations after suffering a bleed on the brain.

His recovery was difficult and frustrating.

Dan, pictured above, had to learn how to walk and talk again.

The injury also left him with short-term memory problems and loss of sight in his right eye. This dented his confidence and led him to become socially isolated.

To help his recovery, he was put forward to take part in the Premier League Enterprise Challenge.

“We had brought him back into school gradually and this opportunity presented itself,” says Lathom High head teacher, Jane Galbraith.

“We were able to bring him through the programme and assist him develop his speech and his memory through the challenge.

"It helped Dan have that close working relationship with four other students and then practice things in the safety of that group. It was safe for him to get things wrong.”

Last year’s competition was focused on creating ideas to diversify a club’s fanbase and Dan drew on his own experiences watching Wigan as a visually impaired fan as the basis for the Lathom School proposal.

With the support of his team, the school and Wigan Athletic Community Trust, Dan started to present to rooms full of people, helping pitch his team’s ideas to school staff, peers as well as the local MP.

Last year, after progressing through local and regional heats, the Lathom team triumphed at the head offices of EY. It had been 18 months since Dan had suffered his injury.

“I really hope it will be a platform so Dan believes that he can be incredibly successful,” adds Jane.

“He’s shown what character and resilience can do to get you through. Yes, there were barriers but he overcame them.”

Dan will return to the scene of Lathom's triumph on Monday to see which of six school will win the 2019 Premier League Enterprise Challenge on Monday.

“When I had my operation, I didn’t think I was ever going to be in competitions," he says.

“But we won in a final. It’s something that I didn’t think would happen. It has shown me what I am capable of.”

Return to old self

And his mum Joanne believes the Challenge will have an impact on him for years to come.

"I have no doubt the programme has helped to change my son’s life because he has returned to his old self,” she says.

“It has helped to energise, focus and provide Dan with a platform to redevelop his confidence and belief in himself.

"I will always be thankful for this opportunity."

The Premier League Enterprise Challenge is run in partnership with Sport Relief and has been in operation since 2008, with more than 35,000 young people engaged to date.